Hydrogen in the Earth's core - Water-rich birth of the Earth -

Ryuichi Nomura, graduate student in the doctoral course at the Graduate School of Science and Engineering, Tokyo Institute of Technology (now a researcher of Earth-Life Science Institute [ELSI], Tokyo Tech from April, 2014), and Professor Kei Hirose, the director of ELSI, along with the colleagues at Japan Synchrotron Radiation Research Institute, Kyoto University, and the Japan Agency for Marine-Earth Science and Technology, have discovered a large amount of hydrogen present in the Earth's core. The Earth had gotten such a large amount of water (80 times that of ocean) during the Earth's formation, but the most of it was incorporated into the core.

By placing mantle material in high-pressure/high-temperature environment corresponding to the bottom of the Earth's mantle and then checking any traces of fusion melting using X-ray micro-CT imaging technology at synchrotron radiation facility SPring-8, the research group clarified that the melting temperature of the mantle directly above the core is around 3,600 kelvins. Since the lowermost mantle is largely solid, temperatures of the bottom of the mantle cannot exceed the melting temperature of the mantle. This is at least 400 kelvins lower than previous estimates. On the other hand, the outer core must be liquid even at such low temperatures. Pure iron would not be molten at these lower temperatures, but iron alloying with about 0.6 weight % (25 atomic %) of hydrogen. Hydrogen (about 80 times mass of the ocean in terms of water), have entered into the core from the hydrous magma ocean that is thought to have existed on Earth during core formation.

The core compositions, the amount of ocean in exoplanets, and the origin of Earth's water would be clarified with further researches.

This research paper appeared in the American scientific journal "Science." 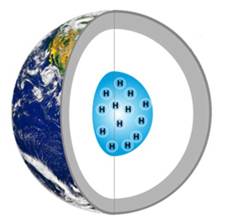 A cross-section of the Earth: from the surface - the Earth's crust (dark grey), upper mantle (light grey), lower mantle (white), and core (light blue). When the Earth was formed, the majority of the water that the Earth had during the time of its formation was reduced to hydrogen and taken into the core. The amount of hydrogen in the core corresponds to around 80 times that of Earth's ocean in terms of water.