An international research team(1) including Masato Nikaido (Assistant Professor), Hidenori Nishihara (Assistant Professor), and Norihiro Okada (Professor Emeritus), of the Tokyo Institute of Technology's Graduate School of Bioscience and Biotechnology, proposed that morphological/ecological diversity in cichlid freshwater fish living in the 3 great lakes of East Africa stem from the ancestral polymorphisms(2) that existed in ancestor genomes. This was realized by sequencing and comparing the entire genomes of a total of 5 species of cichlid fish that live in the 3 great lakes and their surrounding rivers.

Specifically, compared to ancestor species living in the rivers, the genomes of the cichlid fish that live in the 3 great lakes had remarkable gene duplication(3), coding sequence diversification in the gene coding region(4), and genetic expression divergence associated with transposable element(5) insertions. Additionally, the polymorphisms existed in the ancestor genomes before the occurrence of adaptive radiations(6) was shown to be contributed to diversification and parallel evolution(7).

It was known that cichlids were a biologically important group, being a good example of large-scale adaptive radiation and parallel evolution, but there had been no elucidation at the molecular level. Our research team will now experimentally verify whether the differences in DNA clarified in the research are actually related to morphological diversity, and also whether natural selection(8) was operated in those DNA differences. The results of the research were published in the scientific journal "Nature" in September 2014. 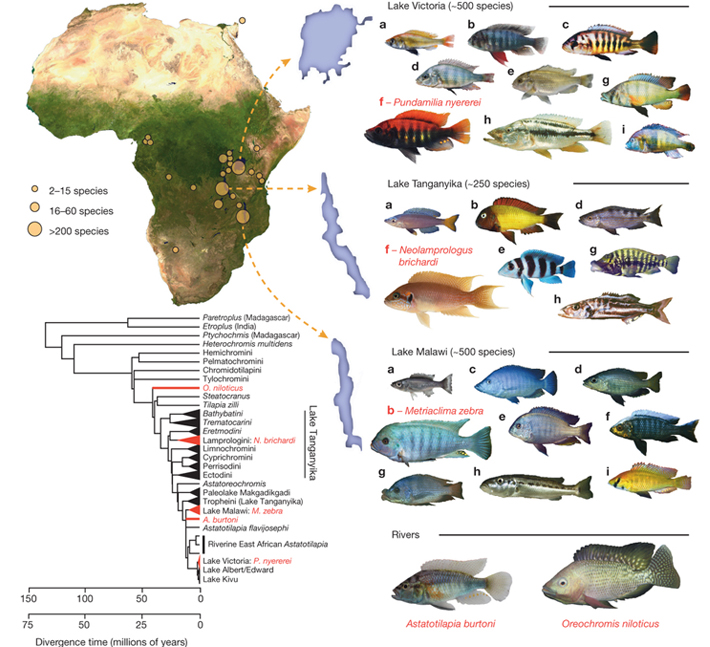 It is known that when a mutation occurs within a group, it either spreads to the entire group or disappears after evolutionary time period. However, variations have sometimes been observed to exist in a population after the set time period as polymorphisms, and which thereafter diverge and are sorted to the descendant groups, and this is called ancestral polymorphism. In the comparative genomic analysis carried out this time, it was clarified that there exist many ancestral polymorphisms in cichlid genomes.

When one gene increases to 2 or more genes. It is predicted that duplicate genes generally have an altered function and contribute to species diversity. Hox gene and olfactory receptor gene groups are considered as having been formed through gene duplication.

A unit of DNA sequence able to be moved from one location to another in a genome. Many kinds of transposable elements exist.

When one or a few ancestor species exhibit remarkable speciation repeatedly in a short time. It is believed to happen easily in environments where ecological niche become vacant.

When organisms with different ancestors evolve with morphology and ecology that closely resemble each other. It is believed that most instances occur through adaptations to similar environments.