Switching on the future: Electronic switches on the molecular scale

The quarter thiophene-based molecule consists of four thiophene rings and has four binding sites that attach to the gold electrodes. Owing to the structural symmetry, Fujii, Kiguchi and co-workers found three types of binding configuration for the junction. Their STM-BJ experiment and theoretical simulation revealed that the quarter thiophene junction exhibits three conductance states with distinct electronic conductivities. These three states depend on the binding sites of the molecules, and the external mechanical force induces reversible switching among the three conductance states.

Molecular junctions with multi anchor-sites such as these, coupled with the dynamic control of different possible binding sites, could lead to the development of functional molecular devices with resistive switching types. 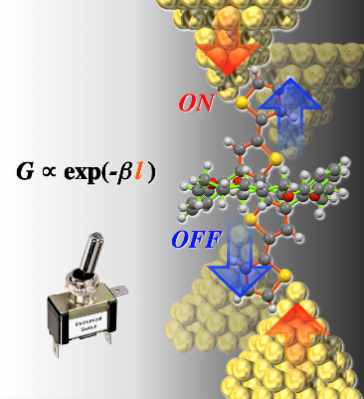