The analysis of empirical economics has long made use of a tool called the generalized method of moments (GMM). This method is used as a generic way of estimating parameters in an empirical model where the general shape of distribution is unknown.

However, there are considerable reliability problems with GMM, particularly in its finite sample performance; for example, GMM creates distortions of null rejection probabilities in hypothesis testing.

Now, Yukitoshi Matsushita and Taisuke Otsu at the London School of Economics have suggested a new way of testing this so-called over-identifying restriction, which is based on the Bartlett correction of empirical likelihood.

Empirical likelihood is an attractive method to deal with the distortion problem of the null rejection probabilities. Matsushita and Otsu illustrated the use of Bartlett correctability in this scenario, a second-order refinement based on the Edgeworth expansion. In a series of tests, the researchers found that these methods provide reasonable improvements for the properties of the null rejection probabilities.

Since testing for over-identifying restrictions is a fundamental problem in assessing the validity of economic theory, the team's new method makes a significant contribution to enhancing the reliability of empirical economic analysis. 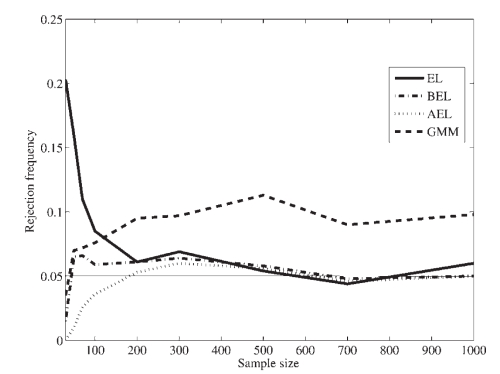