A new, efficient light-harvesting system based on the principles of natural photosynthesis is developed by researchers at Tokyo Tech

Scientists have long been trying to emulate the way in which plants harvest energy from the sun through photosynthesis. Plants are able to absorb photons from even weak sunlight using light antennae made from chlorophyll molecules in their leaves. This absorbed energy is then transferred to reaction centers wherein the plants create the sugars they use as food. So far, artificial systems built to replicate this super-efficient natural process have been limited to a single reaction center with a few light absorbers, and have been unable to absorb enough energy from light sources with low photon levels such as sunlight.

Now, Osamu Ishitani at the Tokyo Institute of Technology, along with researchers from Toyota Central R&D Labs, Inc., has created an efficient, artificial light-harvesting system based on the natural two-step process of photosynthesis. The new system uses man-made 'leaves' as light absorbers, which relay energy through a metal complex to feed a final energy acceptor.

"It is difficult to make an efficient solar-energy converter using molecular devices such as so-called photocatalysts because the molecules are so small and solar light is so dilute," explains Ishitani. "Such systems would require huge numbers of molecular devices, which are expensive and time-consuming to make. Introducing devices with the ability to harvest light into solar-energy conversion would be one possible solution."

Ishitani and his team realized that building a system with multiple light absorbers feeding a smaller number of energy relay 'antennae' linked to an energy acceptor would allow more photons to be absorbed from dilute light, with less energy being lost along the way.

The researchers created a device with 440 'leaves' using tubes made from so-called periodic mesoporous organosilica (PMO) and light-absorbing biphenyl (Bp). The PMO-Bp complexes were linked to five connected rhenium metal sticks, which transferred the light energy harvested by PMO-Bp directly to a central ruthenium sphere. In this way, the photons from the light source were concentrated very efficiently, first through the rhenium sticks and then into the ruthenium reaction center, with little loss of energy en-route.

In a series of tests using the new system, Ishitani and his team found that the reaction center of their device was capable of emitting a strong light powered by the photonic energy from the man-made 'leaves'.

The new system could be used to build better photocatalysts, which can be used for a number of purposes including CO2 reduction and water oxidation photocatalysis. However, Ishitani and co-workers state that it will be some time before artificial photosynthesis becomes commonplace in such systems, because the process requires considerable further research and development.

(Left) A ruthenium complex connected to the center of the rhenium tetramer is adsorbed into the mesopores of periodic mesoporous organosilica (PMO). (Right) Photons absorbed by PMO framework are first concentrated to the rhenium oligomers, and then to the ruthenium reaction center 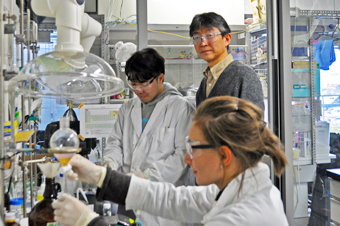 Osamu Ishitani at the Laboratory