Building on the results of President Mishima's visit, and in order to promote tangible cooperation in the field of mechanical engineering, a delegation was dispatched on September 22-23 to visit and network at MIT and at enterprises based in Boston seeking to probe possibilities for future joint research and joint development. The delegation included seven members of Tokyo Tech's teaching staff and 14 Japanese corporate affiliates. On September 22 a joint workshop with MIT was held and on September 23 visits were made to Boston area universities (MIT and Harvard University) and MIT-initiated venture enterprises. 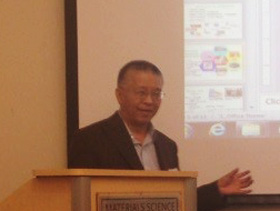 An introduction to MIT at the opening session
given by Professor. Gang Chen,
Mechanical Engineering Department Head at MIT 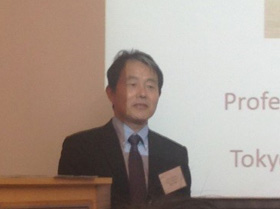 An introduction to Tokyo Institute of Technology
at the opening session given by Professor Yukio Takeda,
of the Graduate School of Science and Engineering

Following the trip, in December Professor Asada, one of the key members at MIT, will visit Japan, and is scheduled to give a lecture at Tokyo Tech on December 16. A joint workshop with MIT at Tokyo Tech is also planned next year. Details will be announced as the events draw closer, and we look forward to your participation in these exciting opportunities.

It is anticipated that these initiatives aimed at new joint research and product development projects as well as collaboration between Tokyo Tech, MIT and Japanese enterprises, will in turn lead to new, large-scale international joint research projects. We would like to deepen cooperation with MIT in both research and education by promoting interaction in a wider range of fields, based initially on developments in the mechanical engineering field.

In an environment that includes the prestigious educational and research organizations such as Harvard University and MIT, as well as abundant venture capital, Boston also has a concentration of many high-tech enterprises in fields including ICT, pharmaceutical, medical equipment and energy. The future goal is for the realization of Japanese-American industry-academic collaboration. 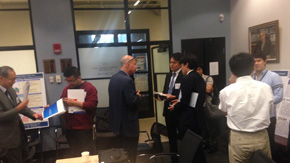 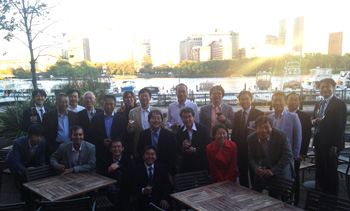 A commemorative photograph opportunity with members
of the delegation, and MIT Department Head Professor Chen
and others before a dinner party hosted by MIT