Researchers based at Tokyo Institute of Technology have developed a new form of 'rubber-like' glass which may have applications in high temperature or strongly oxidative environments.

Flexible substances that can withstand high temperatures are much sought after for various industrial and engineering applications. Types of glass made from oxides are hard at room temperature and fracture easily, but scientists at Tokyo Institute of Technology and Asahi Glass Co. Ltd in Yokohama have uncovered a certain kind of oxide glass - so-called mixed alkali metaphosphate glass - that behaves quite differently when it is stretched from a supercooled liquid state.

Seiji Inaba, Setsuro Ito and Hideo Hosono study oxide glasses that possess structures similar to those of organic rubbers, consisting of soft, long, straight chain molecules. The team discovered that metaphosphate glass expands and contracts rather like rubber at a temperature close to the 'glass transition temperature' (the point at which glass changes state from a super-cooled liquid to a solid).

The researchers stretched a supercooled, metaphosphate glass made from mixed alkali metals - lithium, sodium, potassium, cesium, and phosphorus oxide. Upon heating and elongation, the straight chain molecules in the glass became highly orientated, and the glass itself became rubber-like. When the researchers heated the glass still further, it contracted in size by several tens of percent, before returning to its original unordered molecular state. This property is known as 'entropic elasticity', and this is the first time that a type of glass has been shown to display it.

Rubber-like oxide glass such as this could be considered for applications in high temperature, oxidizing environments in which organic polymer rubber could not cope. The results of the group's research will appear in the online edition of the magazine Nature Materials, published on December 2, 2014.

Elastic substances are those with molecules that are more entangled in their natural state than they are when stretched by an external source, at which point their molecules become more regularly oriented without breaking or becoming deformed. The substances then return to their original unordered state when released. This property is known as 'entropic elasticity', and is found in substances such as rubber, silicone, polyurethane and sulfur. A common structural feature of these substances is that their highly polymerized and very flexible straight chain polymers form strong cross-links through physical and chemical bonding when they are stretched and exposed to temperature changes.

Oxide glass is widely used in application such as window glass, wherein the atoms are usually strongly linked in a lattice structure. If the glass is stretched at or above the glass transition temperature (Tg), the lattices are broken and rearranged, producing permanent deformation. Even if the force is removed, the glass does not resume its original shape. This structural difference from rubbery substances has meant that no oxide glass exhibiting entropic elasticity has been discovered, until now.

Inaba and his team conducted experiments with a mixed alkali metal metaphosphate glass with the chemical composition Li0.25Na0.25K0.25Cs0.25PO3. This oxide glass is isotropic and is hard and easily fractured at room temperature, in the same way as normal glass. However, when it is heated to the vicinity of the glass transition point Tg and then cooled in a stretched state, the glass becomes anisotropic - its physical properties become directionally dependent - due to the orientation of the straight chains.

When the metaphosphate glass undergoes heat treatment at around Tg, it shrinks up to 35%, but there is no change in volume. Furthermore, while many materials such as ordinary glass, ceramics and metals, are exothermic when contracted due to heat, the glass developed by the team is endothermic when it contracts.

Metaphosphate glass, whose structure resembles that of organic rubber, exhibits a degree of contraction never seen before in oxide glass. It displays great anisotropy due to its straight chain orientation and reverts to its original structure when released. 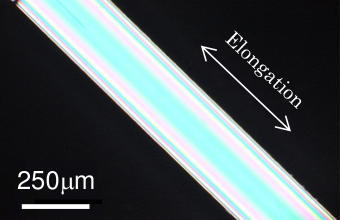 Fig. 1: When the anisotropic glass undergoes heat treatment at around Tg, the long side shrinks up to 35%. 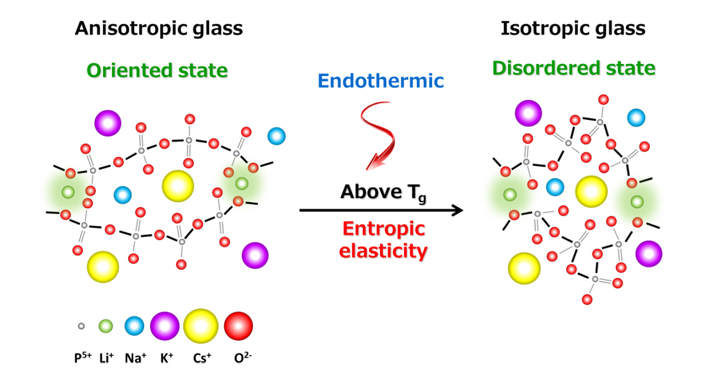 The current paper shows how the internal structure of oxide glass, which is hard and readily fractures at room temperature, can be manipulated to exhibit the property of rubber-like elongation at high temperatures. The results suggest this glass may have applications under high temperature, oxidizing conditions, in which organic polymer rubbers could not be used. Further research could lead to rubber-like glass with even better properties and further advances in the science of such glasses.