Symptoms of Cushing's disease include weight gain, muscular weakness, mood and reproductive problems, and if untreated patients can die from the resulting infections and cardiovascular problems. Although first described by Harvey Cushing back in 1932, as Martin Reincke and colleagues in Germany and Japan point out in their latest Nature Genetics report, the mechanism causing the disease "has remained obscure since its first description". Now by sequencing the tissues responsible the researchers have identified clusters of mutations that cause Cushing's disease as well as how these mutations bring the disease into effect.

The disease arises from benign tumours on glandular pituitary tissue - corticotroph adenomas - which excessively secrete the hormone adrenocorticotropin (ACTH). Previous studies sought to identify mutations that might cause the disease through sequencing candidate genes and microarray studies, but these made little progress. Instead, the researchers applied a particular type of DNA sequencing known as 'exome sequencing' to the pituitary corticotroph adenoma.

The collaboration included researchers from Ludwig-Maximilians-Universitat Munich, the University of Wurzburg, the Max Planck Institute, the Helmholtz-Center Munich, Universitat Hamburg, Universitat Erlangen in Germany and Tokyo Institute of Technology in Japan. The research team exome-sequenced samples from 10 patients with Cushing's disease and noticed a small number of protein altering mutations in the adenoma tissue. The researchers further identified the gene harbouring the mutations as ubiquitin-specific protease 8 (USP8), and were able to pinpoint the region of USP8 prone to mutation in Cushing's disease.

Previous research observations of Cushing's disease have highlighted strong expression of another gene, epidermal growth factor receptor (EGFR). By examining EGFR in HeLa cells expressing USP8, the researchers behind this latest research demonstrated that this was the result of USP8 mutations inhibiting downregulation of EGFR.

The researchers conclude that their results "not only identify the first of so far enigmatic driver mutations in corticotroph adenomas but also elucidate a novel mechanism by which the EGFR pathway is constitutively activated in human tumours." Further research will be required for a more detailed understanding of genetic onset of the disease.

The adenomas that cause Cushing's disease are benign tumours of epithelial tissue that grow on the pituitary gland. The tumours comprise corticotroph cells, a hormone producing cell that secretes asdrenocorticotropin (ACTH). While the pathological role of ACTH hypersecretion was already known, previous studies had been unable to identify the molecular mechanisms behind these hormone processes that lead to Cushing's disease.

When RNA is processed by splicing, parts of the RNA - the introns - are removed. The remaining RNA, the exons, are collectively referred to as the exome.

While DNA sequencing finds the sequence of proteins for the whole DNA, by focusing on the exons, exome sequencing provides information specifically on the protein-coding genes. Changes to these genes are more likely to have significant ramifications on the organism.

Ubiquitination is a reversible protein modification process that occurs by means of a small protein called ubitquitin, which is found in all eukaryotic cells (cells containing a nucleus and other structures enclosed within a membrane). Ubiquitination regulates the fate and function of proteins.

USP8 is a ubiquitin-specific protease enzyme that can remove ubitquitin molecules from target proteins. The discovery of a high number of mutations in the USP8 gene in Cushing's disease prompted the researchers to make further investigations on the mutant USP8 enzymes at biochemical and cellular levels. From these studies they could identify the mechanisms behind the mutations and the effect on epidermal growth factor receptor (EGFR), a gene that mediates the synthesis of an ACTH precursor. 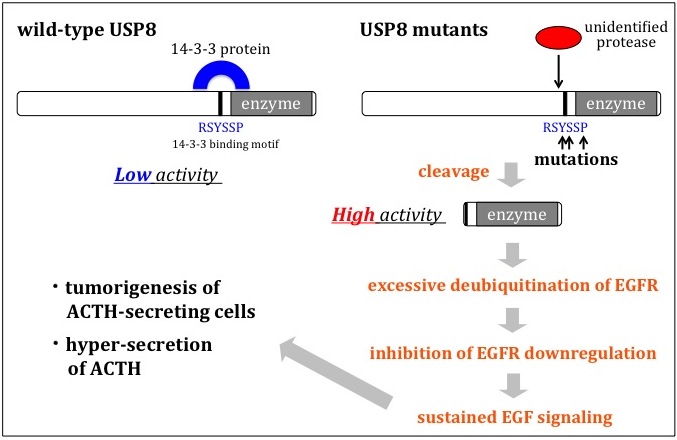 The mechanisms how USP8 mutations lead to Cushing's disease

Figures in both this page and pdf file were replaced on December 15, 2014 due to copyright issue.