The progress of Tokyo Tech's Education Reform, scheduled to be fully implemented in April 2016, was announced at a press briefing by President Yoshinao Mishima and Executive Vice President for Education and International Affairs Toshio Maruyama. This was the second press briefing on the Institute's education reform, the first having taken place in October 2013. 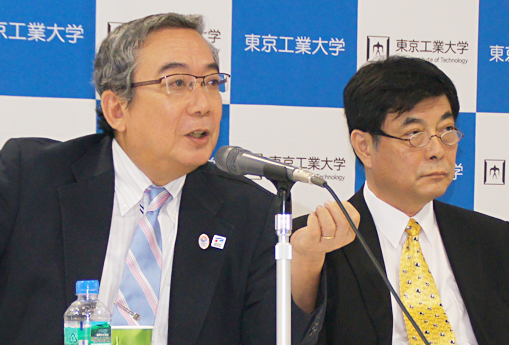 Joining of undergraduate and graduate schools

Developing scientists and engineers with excellent skills and leadership

President Mishima also discussed what the reformed education system will offer, including newly designed curricula for each field, graduate courses conducted in English, and improved liberal arts education. Additional topics included initiatives to improve the educational environment, such as implementing a quarter system and achievement evaluation.

Tokyo Tech aims to become one of the world's top 10 research universities by promoting quality education and research. Through the education reform, the Institute strives to achieve its educational goal of developing scientists and engineers with excellent skills and leadership.