Tokyo Tech invited Professor Peter Atkins, the author of Atkins' Physical Chemistry, to give special lecture sessions on November 17 and 19, 2014.

Alongside other special lectures given by internationally-renowned scientists and engineers for 1st-year undergraduate students in each academic group, these lectures were organized as part of a trial for the Frontier Education Program, which has been implemented to catalyze the Institute's ongoing education reform. 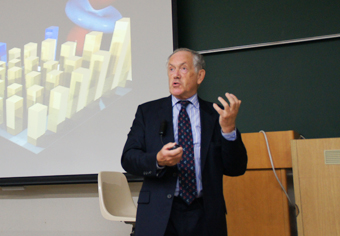 Professor Atkins graciously accepted Tokyo Tech's invitation to give two 90-minute lectures to 1st-year undergraduates in the 3rd academic group. The Institute invited the professor based on the idea that nothing could motivate and inspire the students more than hands-on lectures given by the author of their textbook. His Atkins' Physical Chemistry is a common textbook used in all physical chemistry classes, including their Chemistry II class. With its 10th edition now published, the book has become a 'bible' in this field. After retiring from an extended tenure at Oxford University, the professor still plays an active role in education. He publishes chemistry textbooks and science books for the general public almost every year, with a total of 70 works authored to date, many of which have been translated into Japanese

The lecture for the 130 students in the 3rd academic group, who currently use the translated version of Atkins' Physical Chemistry, was held on November 19th. This opportunity allowed them to learn key points and hints in understanding thermodynamics. The lecture included many visual representations to explain the basic concepts of thermodynamics from enthalpy to chemical potential, particularly emphasizing the definition of base quantity.

Prior to the above, an introductory lecture was given on November 17 to general students and Institute staff based on his recent book, Physical Chemistry: A Very Short Introduction. Professor Atkins started the session by outlining the concepts of quantum chemistry, his specialty, and guided the audience to conceptualize states of matter, phase changes, and chemical reactions in illustration-based slides with mathematic expressions sparingly used for easier understanding. A total of 240 people attended the session.

During a courtesy visit to the president of Tokyo Tech

Nothing is more compelling than a lecture given by the author himself. The professor's effective visuals and clear speech helped students understand the lecture despite their varying levels of English proficiency. Professor Atkins captured the students' attention throughout the lecture and, to quote the professor's own words, succeeded in "igniting the fire and spreading the flame."

These lectures were held as part of the Frontier Education Program, implemented to expose 1st-year undergraduates to advanced technologies at an early stage and encourage them to master the practical skills of applied science and engineering. Through these events, Tokyo Tech aims to develop global scientists and engineers capable of leading technical innovation.