A research team of Tokyo Tech, University of Tokyo and RIKEN reported in the journal of Nature Chemistry the first isolation and characterization of a diarylborinium ion (i.e., two-coordinate R2B+ cation) with a C-B+-C bond (Fig. 1). The team also demonstrated the exceptional Lewis acidity of the borinium ion through an unprecedented reaction with CO2. 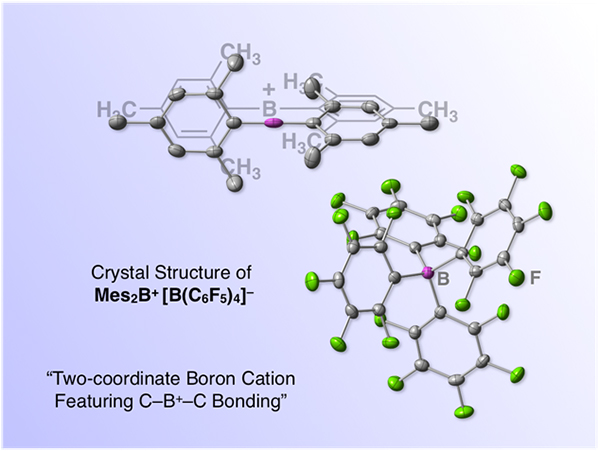 Boron compounds have captivated chemist because of their great utility in many fields including organic transformations, supramolecular complexation and chemical bonding theory. The properties of boron compounds are characterized by the electron deficiency and the low electronegativity of boron. Typically, boron atom in a neutral three-coordinate state (i.e., borane) bears only six valence electrons and desires to accept an electron pair into its vacant 2p orbital, providing strong Lewis acidity (Fig. 2).

So, what would happen if borane loses one chemical bond? Chemists have explored such a two-coordinate boron cation, arriving at a general consensus that the synthesis of a two-coordinate boron cation must require lone pair-donating substituents such as amino groups that can compensate for the electron deficiency on boron via dative π-bonding from heteroatoms (note). Now, this consensus is upset. A borinium ion (R2B+), devoid of lone pair-donation from heteroatom, is realized in a stable form (Fig. 1). Namely, a borinium ion [Mes2B+; Mes (mesityl) = 2,4,6-trimethylphenyl], bearing two aromatic groups that are incapable of donating a lone pair to the cation center, was successfully isolated for the first time. A scalable protocol for preparing the borinium ion salts using a readily available anion [e.g., tetrakis(pentafluorophenyl)borate] was established, thereby enhancing the synthetic accessibility of this new boron species. The structural features of the borinium ion in the solid state and in solution were unambiguously characterized experimentally (Fig. 1) and rationalized theoretically. Although the electronic structure of the borinium ion deviates significantly from the octet rule, the boron atom is not subject to coordination by the counter anion or solvent molecules, providing exceptional Lewis acidity with the cationic boron center. While the borinium ion has surprisingly high thermal stability (e.g., the decomposition point of a carborane salt is as high as 320 °C), it displays peculiar reactivity, exemplified by an unusual arylation-deoxygenation reaction of carbon dioxide (Fig. 3).

Fig. 3: Arylation-deoxygenation reaction of CO2 caused by the diarylborinium ion.

The "birth" of the diarylborinium ion (Mes2B+) may offer not only a novel platform for molecular Lewis acid chemistry but also a powerful tool for exploring new chemical transformations.