Constraining the strength of magnetic fields in planet-forming environments

Planets form in gaseous disks around young stars called protoplanetary disks. These disks are believed to evolve by interacting with magnetic fields in the interstellar space.

However, there is great uncertainty in the magnitude of the realistic range of the magnetic field strength within the disks because of the difficulty in direct astronomical measurements.

Now, Satoshi Okuzumi and Taku Takeuchi at Tokyo Institute of Technology, together with Takayuki Muto at Kogakuin University, have shown theoretically that there is an upper limit of the magnetic field strength in protoplanetary disks.

The team analyzed the transport of large-scale magnetic fields in a disk based on a mean-field transport theory known in astrophysics. By using a computer algebra system, they successfully derived the exact solution of the mean-field equation, which led to the discovery of the universal upper limit.

The derived upper limit explains well the range of the observed rates of gas accretion from disks onto the central star. The upper limit is also consistent with the observational fact that young stars have much smaller magnetic fluxes than parent molecular cloud cores.

This study is an important step towards understanding how the planet-forming environments evolve around young stars. 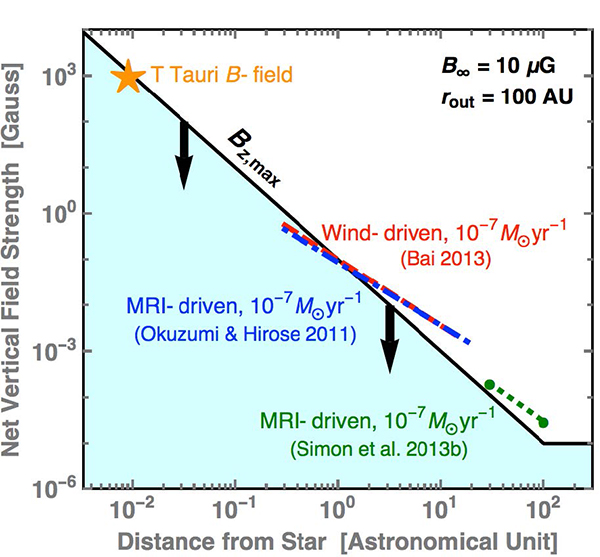