Plant fertility - how hormones get around

Researchers at Tokyo Institute of Technology have identified a transporter protein at the heart of a number of plant processes associated with fertility and possibly aging.

Very low quantities of hormones instigate a number of the plant processes needed for survival, growth and proliferation - all significant factors affecting crop yield. However getting the right hormones to the right place is crucial. Recent studies have identified a number of hormone-transporting proteins that import and export hormones across the plasma membrane into and out of cell, helping to understand certain key processes. Now researchers at Tokyo Institute of Technology, Tohoku University and the RIKEN Center for Sustainable Resource Science have identified a protein that is core to a number of the processes that control fertility in the small mustard-like plant, Arabidopsis.

Hiroyuki Ohta and his team used gene network analysis to highlight genes that respond to jasmonic acid (JA) - a type of hormone associated with fertility, aging and defence responses for which so far no transporter protein has been identified. They noticed tight co-expression between the gene encoding GTR1/NPF2.10 protein and JA biosynthesis genes. Further studies showed that treatment with JA increased GTR1 expression in seedlings confirming the link. Hormone and stamen development was affected in plants with GTR1 associated mutations and their leaves seemed to turn brown and age in the presence of JA, suggesting GTR1 affects JA sensitivity.

Further studies suggested that GTR1 plays a key role in the transport of another hormone gibberellin (GA), because GA treatment fully complemented the defect of gtr1 in stamen development and fertility. While former research had established that JA and GA were both key to plant fertility and that there may be crosstalk between the two, the function of interplay had not been well established. Treating JA-deficient mutants with GA led to swollen fruit but no mature seeds. "These results indicated that JA signalling is required for stamen development and is independent of the stimulation of GA signalling, even though GA could partially compensate for a lack of JA function during floral development," state the researchers in their report.

The researchers conclude that GTR1/NPF2.10 is a multifunctional transporter for a bioactive form of JA, GA and glucosinolates - a class of organic compound derived from glucose and amino acid. The results also suggest that GTR1/NPF2.10 plays an important role in stamen development and fertility and may also be important for hormone transport in vegetative tissue.

The researchers used Arabidopsis - a small flowering plant related to cabbage and mustard - as the focus of their research. There are many different types of Arabidopsis including Arabidopsis thaliana - the type used in the current study, otherwise known as Thale cress -is considered to be a model organism. Changes in the plant are easily noticeable so it is often used in biological research. It was also the first organism to have its full genome sequenced.

Arabidopsis proliferates through sexual reproduction, requiring fusion between female and male gametes so that the genes passed to the next generation combine those from different parent plants. This fusion takes place through pollination, where pollen from the male stamens - which develops the male gamete - makes contact with the seeds in the female part of the plant, the ovule.

The role of JA and GA

Jasmonates (JA) and gibberellins (GA) are two types of hormones that have been noted for their potential significance in seed germination, flowering and development. Plant JAs are hormones derived from a type of acid and regulate several plant processes from pollen and stamen maturation, aging and responses in defence against both other organisms and environmental factors. JA-deficient Arabidopsis plants are prone to filament elongation defects and incomplete flowering and pollen release, making them male sterile.

GA regulates stamen development and is required for flowering, seed germination, root and shoot growth and development of the seeds and seed capsule (or fruit). Male sterility in certain GA mutants has also been attributed to defective, that is, arrested stamen filament elongation. While previous studies suggest the existence of cross talk between the two types of hormones, the functional role of the interplay in flower development has so far not been identified.

The researchers identified the significance of GTR1 in JA mediated processes by analysing genes co-expressed with nine different types of JA biosynthetic genes. The analysis revealed a unique gene, AT3G47960/GTR1/NPF2.10, which encodes a glucosinolate transporter. The gene belongs to the NITRATE TRANSPORTER 1/PEPTIDE TRANSPORTER FAMILY (NPF). Other NPF genes have been found responsible for the transport of auxin (a growth hormone) abscisic acid (ABA) which functions in many developmental processes including dormancy, as well as GA. This led to the initial hypothesis that GTR1/NPF2.10 may be responsible for the transport of JA or other hormones. 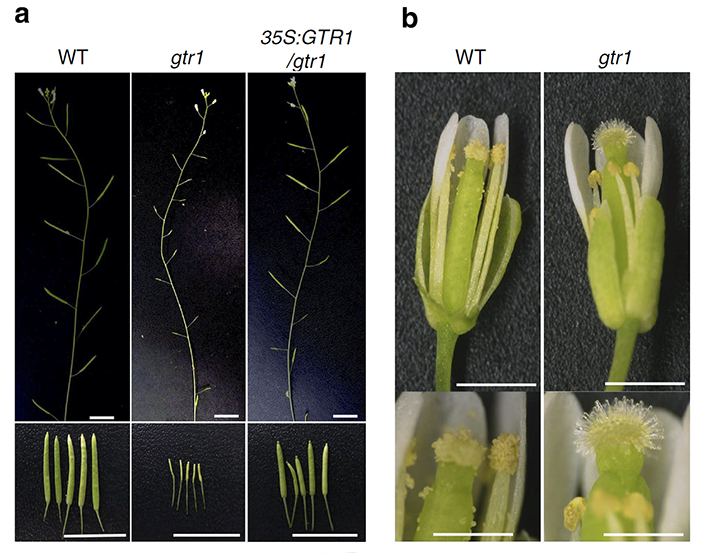