Since Tsinghua University and Tokyo Tech concluded a university-wide agreement in 1985, the two universities have conducted fruitful academic and student exchanges through many collaborative projects, including the Tokyo Tech-Tsinghua University Joint Graduate Program, the TKT Campus Asia Consortium, and the ASPIRE League (Asian Science and Technology Pioneering Institutes of Research and Education). 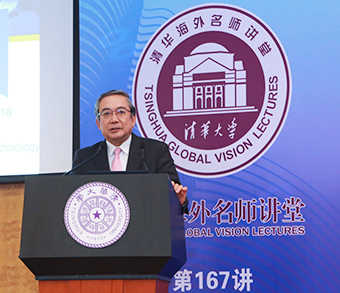 In the morning of December 22, President Mishima gave a lecture titled "Toward World-Class Education and Research" and introduced Tokyo Tech's ongoing education reform. The lecture was delivered as one of the "Tsinghua Global Vision Lectures," a lecture series that features world-renowned scholars - including Nobel laureates - and global business leaders. Among the large audience were Mr. Wataru Todoroki, First Secretary (Science & Technology Attaché) of the Embassy of Japan, faculty and students of Tsinghua University, and Tokyo Tech students currently studying at Tsinghua University. The lecture was followed by a lively question and answer session.

Before the lecture, the Tokyo Tech delegation was received by Vice President Xie Weihe, Professor Qu Delin (Director of the Japanese Studies Center and President of the Tokyo Tech Beijing Alumni Association), and Professor Xing Xinhui (Vice Chair of the Department of Chemical Engineering). Vice President Xie welcomed President Mishima, stating that the two universities have had a long and strong relationship of mutual trust. They held a meeting and exchanged opinions about university reforms, human development, and education and research exchanges.

After the lecture, President Jining Chen and President Mishima signed a renewal of the university-wide agreement in a signing ceremony with the attendance of Professor Shi Jinghuan and Dr. Yang Jian. The ceremony was followed by a luncheon hosted by President Chen, and both presidents agreed to further the exchange between the two universities in a wide range of areas. 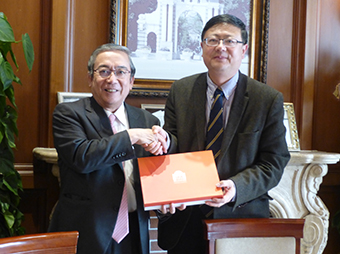 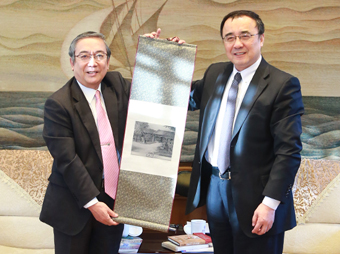 President Mishima then visited the China-Japan Youth Exchange Center, a student dormitory, and gave words of encouragement to Tokyo Tech students who are studying at Tsinghua University.

President Mishima's visit to Beijing provided a great opportunity for Tokyo Tech to strengthen its relationships with Tsinghua University as well as with the Institute's students and alumni in Beijing.