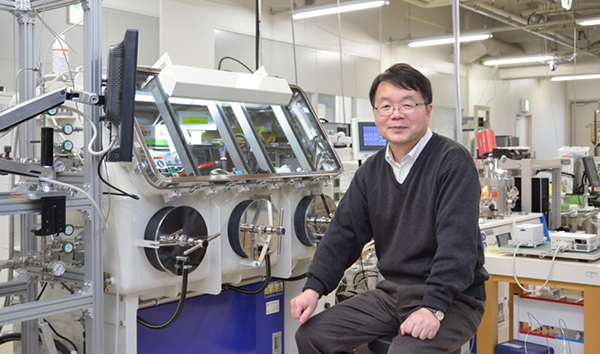 Professor Hideo Hosono has been honored with the 2nd Intellectual Property Special Contribution Award by the Japan Science and Technology Agency (JST) for the development of oxide semiconductors applicable to high-resolution displays. Hosono is a professor of the Frontier Research Center and the director of the Materials Research Center for Element Strategy (MCES) at Tokyo Tech.

Hosono's creation, the IGZO TFT (thin film transistor made of semiconducting material indium gallium zinc oxide), caused a sensation in the display industry and is regarded as a groundbreaking invention due to its major impact on the industrial world. In addition to high-resolution, 3-D, and large-sized displays, IGZO-TFTs are used in new types of liquid crystal displays for smart phones and tablets, and can also be applied to organic electroluminescent displays.

JST established the Intellectual Property Special Contribution Award in 2011 to recognize outstanding researchers who, through the creation and use of intellectual properties based on original findings at universities and public research institutes, have contributed to the development of science and technology and produced significant socioeconomic results in Japan. Nobel Prize laureate Isamu Akasaki won the first inaugural award for the invention of blue light-emitting diodes. 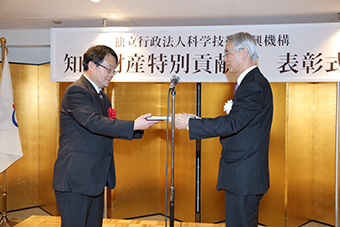 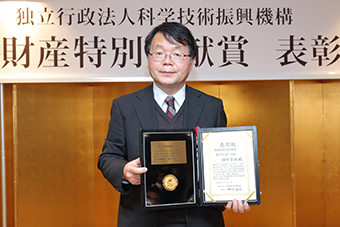 Hosono with the award certificate and medal

Based on the design guidelines on high-mobility transparent amorphous oxide semiconductors (TAOS) I first presented at the 16th International Conference on Amorphous Semiconductors in 1995, I began research on the application of TFTs in the JST ERATO Project “Transparent ElectroActive Materials” in 1999. Using the results of this research, I published papers in the journals Nature and Science and acquired intellectual property rights for my work. I am pleased that not only have my papers and patents been cited more than 5,000 times, but the technologies have been put to practical use. I began the research on high-mobility oxide TFTs such as IGZO with the aim of driving organic electroluminescent elements, and this has finally yielded practical applications.

I would like to convey my sincere appreciation to Dr. Kenji Nomura of Qualcomm Inc., Tokyo Tech Professor Toshio Kamiya, Dr. Masahiro Hirano (former JST Deputy Director-General), Professor Hiromichi Ohta of Hokkaido University, Dr. Masahiro Orita (former Chief Scientist of Hoya Corporation) and all other collaborators. I also express my deepest appreciation to the CANON researchers with whom we conducted valuable collaborative research through the introduction of late Professor Isamu Shimizu, who was the Director of Tokyo Tech's Office of Industry Liaison. I will continue to devote myself to pursuing research findings that provide a technological leap.