The increase in the power generation capability at the Ookayama Campus is being carried out as part of a project to establish an original smart power grid -"Ene-Swallow ver.3" by Tokyo Tech. The smart grid is based on the almost totally power self-sufficient 'Environmental Energy Innovation (EEI) Building' - Tokyo Tech's flagship 'energy conscience research facility' that has 650 kW solar cells and 100 kW phosphoric acid fuel cell. The smart control of the power capability in Ene-Swallow ver.3 is an important step for attaining an appropriate energy mix and power levelling.

Notably, the total power generation capacity of the solar cells at the Ookayama campus is comparable to about a 1.4 MW mega solar power plant.

In addition, the Ene-Swallow ver.3 is highly efficient at driving each distributed power supply and controlling the peak cut with a power prediction equation based on the real-time data.

Furthermore, in the case of power failure each distributed power supply in Ene-Swallow ver.3 work together to supply power to the EEI building, thus self-sustained operation is possible.

This is the world's first technology in terms of the high level of control and scale. 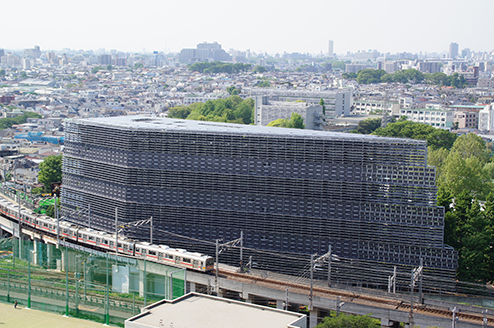 The EEI was designed to be 90% self-sufficient in producing electrical power and generate 60% less carbon dioxide compared with other Tokyo Tech research buildings of a similar size. EEI is a model for constructing energy-efficient and environmentally friendly state-of-the-art research facilities.

Some of the features of EEI include: 4,570 solar cell panels, attached to the roof and southern- and western-facing walls, which have a power generation capacity of 650 kW in total and can be tilted to allow sunlight to enter the building to illuminate rooms; waste heat from a 100 kW fuel-cell system that is harnessed to power the air-conditioning system; motion sensors in the clean rooms which automatically close the doors of unused draft chambers; and a building constructed to withstand an earthquake of magnitude 6.0.

Professor Ihara is collaborating with software and data transmission companies on the development of the Ene-Swallow smart grid to automate power management of the building. The system uses IEEE1888 international internet communication protocol to collect energy data from equipment and devices made by different manufacturers.

The Ene-Swallow smart grid not only offers an efficient means for power management, but will also enable an uninterrupted power supply using backup batteries during natural disasters such as earthquakes - a fact of life in Japan.