These lectures are for Tokyo Tech graduate students, faculty, and staff, but the third lecture of the series was open to the public. 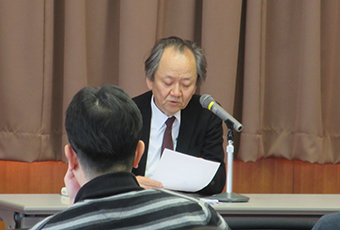 Professor Takenori Inoki examined some of the problems universities are facing today along with the importance of liberal arts education from the following five perspectives:

1.
Universities and the history of universities
2.
Points of caution when talking about Japanese universities
3.
Character of knowledge
4.
The study of humanities to illustrate the concept of humanitas*
5.
Things to be passed down to future universities

Latin noun meaning mankind or human nature. In ancient Roman times, humanitas meant having high morals or cultural accomplishments required for high morals. The Age of the Renaissance brought with it intense examination of ancient Greek and Roman literature, and studia humanitatis. This formed the basis of humanities as a modern academic discipline.

One of the problems raised in the lecture was the excessively achievement-oriented approach and utilitarianism in Japanese universities today.

Early specialization in undergraduate education does not allow enough time for students to study liberal arts courses, including fundamental subjects such as foreign languages and mathematics. Furthermore, graduate students concerned about future employment only focus on studying their field of expertise in order to build a strong performance record quickly. 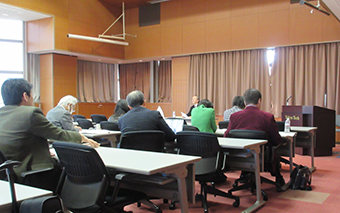 This achievement-oriented approach has also spread to university faculty members. British universities have introduced a point-based system in recruiting faculty, generating concern about the lack of cross-disciplinary ideas and imagination in an over-specialized environment.

A more culturally abundant education in the long run leads to aroused curiosity and the desire to learn, increases high-level reading ability and enriches the imagination. Inoki demonstrated these points using his own experiences, example cases from various universities, and quotes from philosophers such as Cicero.

In addition to imagination, Inoki emphasized the importance of looking at society and people, and of looking at oneself. All learning, in one way or another, relates to human beings, and therefore, students' awareness of human complexity enhances their learning abilities. When studying human complexities and diversity of human behavior, nothing increases awareness like classical writings and literature. Liberal arts education offers an opportunity to gain this awareness, cultivating imagination and historical consciousness, and eventually broadening students' view on humanity itself, Inoki argued. The lecture ended with a lively question-and-answer session.