On January 2014, Honorary Professor (and former president of Tokyo Institute of Technology) Yasuharu Suematsu, a world-renowned researcher of optical fiber communication, was awarded the 2014 Japan Prize.

The Japan Prize Preparatory Foundation was established in 1982, with the approval of the Prime Minister, for the purpose of establishing the Japan Prize as a prestigious international award in the field of science and technology. The creation of the Japan Prize was motivated by the desire to "express Japan's gratitude to international society." This plan was advocated in 1981 by Mr. Taro Nakayama, then Director General of the Prime Minister's Office, and supported with a fund donated by Mr. Konosuke Matsushita, the founder of Panasonic Corporation.

Honorary Professor Yasuharu Suematsu was selected as the winner for "Electronics, Information and Communication"—one of the two prize categories in FY2014.

Honorary Professor Dr. Yasuharu Suematsu has been studying optical communication since the early 1960s, which was the dawn of the photonics age. In the early 1980s, Dr. Suematsu gave shape to his idea of a dynamic single-mode laser, which emits light in a wavelength range where minimum loss is achieved and maintains a stable wavelength even with high-speed light modulation when transmitting information. His research proved to be essential for the modern Internet society and will continue to aid progress into the future. 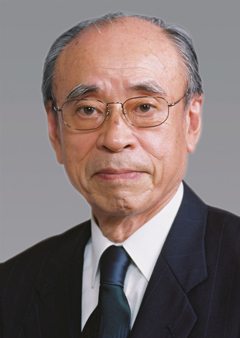 It is truly an honor to receive the internationally recognized Japan Prize.
All of the former laureates of this award have been renowned figures who have laid the foundation of the world's science and technology of today. Therefore, I cannot help but feel extremely humbled and proud to be included in the list.

By the late 1980s, this technology began to be used around the world. I'm thrilled to hear people say that the coinciding development of the Internet would not have progressed as much as I did without the optical fiber systems where these lasers working as a central core. We expect that remarkable progress will continue to be made.

I was able to achieve my research thanks to the support of many people. With generous financial supports both from the Ministry of Education, Culture, Sports, Science and Technology and from the Japan Society for the Promotion of Science, strong unconditional corporate support, and friendly academic and industry competition that has accompanied the progress in optical and electronic technology, I feel very fortunate to have had the pleasure to work with the tireless co-researchers at the Tokyo Institute of Technology, and professors from whom I have learned. Consequently, I feel great joy to have been able to make this contribution to the world.