Two-photon fluorescence microscopy (TPFM) has received considerable attention as an advanced optical technique, especially in the biomedical field, because it can provide both in vivo and in vitro three-dimensional (3D) images deep within the samples of interest using low-energy photons, which significantly reduces the photodamage and photobleaching of tissues and organs. The usability of this technique strongly depends on the performance of the probe molecules.

The development of two-photon (TP) active fluorophores remains an important issue. Dyes that can be excited and fluoresce efficiently in the 'tissue optical window' (650-1100 nm) are especially in demand to maximize the underlying performance of the two-photon fluorescence microscope (TPFM) as an advanced optical technique. Ideally, such dyes would be compatible with the 1050 nm femtosecond fiber laser, which has recently been developed as an inexpensive excitation source to make the TPFM technique universal.

Now, Yosuke Niko and Gen-ichi Konishi (Tokyo Institute of Technology) and colleagues at Yamaguchi University report a novel pyrene-based acceptor-π-acceptor dye, which exhibited outstanding properties such as bright fluorescence and a large two-photon absorption cross-section in the tissue optical window. In living mitochondria, PY provided more sensitive microscopic images than current dyes and showed great potential to be a building block of TP active fluorescent probes for the 1050 nm fiber laser. The team is currently focusing on the use of PY for not only in vitro cell imaging but also in vivo deep tissue imaging, using the 1050 nm fiber laser. 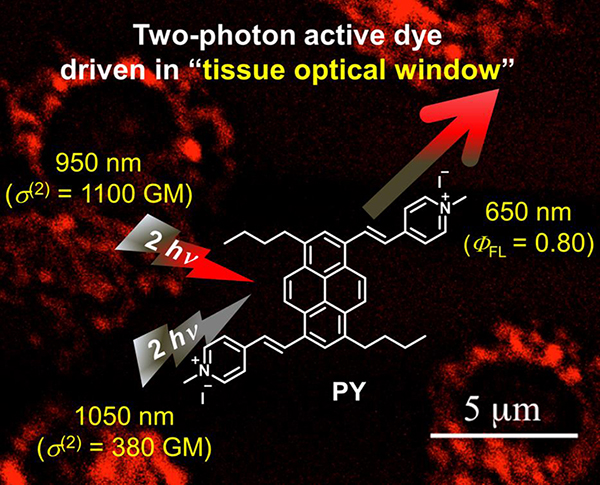