The benefits of eating slowly and chewing thoroughly have been proposed for over a century, but there has been little actual proof of the theory. Now, Naoyuki Hayashi and Yuka Hamada at Tokyo Institute of Technology have shown that, in the three-hour period after eating, energy expenditure is greater if the food was eaten slowly than if it was eaten quickly.

The researchers measured oxygen uptake and body mass of the subjects in order to calculate the energy expenditure associated with digestion, absorption and storage of food, known as diet-induced thermogenesis (DIT). Subjects undertook two trials - one where they swallowed the food as rapidly as possible and one where they chewed as many times as possible. The three-hour DIT was significantly greater, by 15 kcal, when the food was eaten slowly with a greater number of chews, supporting the findings of the initial test study.

Hayashi and Hamada also decided to investigate whether the simple effect of chewing gum provides enough oral stimulation to replicate the effects of slow eating. To do this, they did two further trials - one in which gum was chewed for 15 min immediately after the meal and one in which no gum was given. They found that chewing gum increased the DIT by 6 to 8 kcal.

The researchers suggest that chewing certainly increases the DIT, however the effect of chewing gum does not compare to the effect of properly chewing a meal. 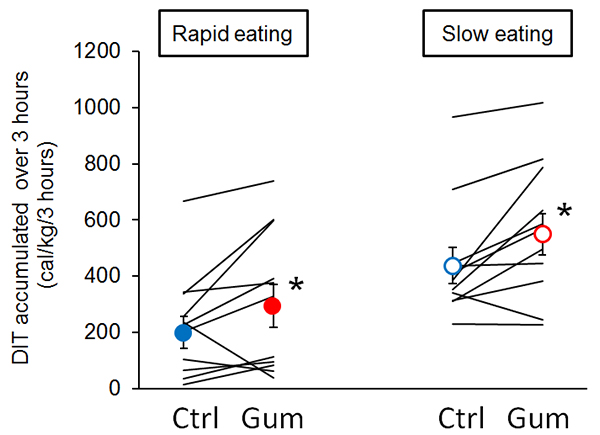 Total energy expenditure (known as diet-induced thermogenesis or DIT) accumulated over a 3-hour period after meals that were eaten rapidly or slowly. Lines show individual test subjects, and circles are the means.