In iPS technology, gene overexpression of the four genes can induce reprogramming of a cell from differentiated state to stem cell state.

However, the mechanism of reprogramming via gene-overexpression remains unclear in spite of the reproducibility of iPS technology.

Now, Daisuke Kiga, Kana Ishimatsu and colleagues at Tokyo Tech and RIKEN have devised a theoretical expression of cell reprograming and proved the idea by using synthetic-biology experiments where simplified genetic circuits were constructed in living cells.

The artificial genetic circuit consists of bistable basal switch and tunable over-producing system. Modulated induction of over-expression temporarily creates a monostable system and thus easily controls the inner state of those cells with the circuit. When cells with one of the basal two steady states are modulated, their cell-inner states around the watershed of basal bistable system are affected by the potential landscape of the genetic circuit. In addition to the effect, fluctuation of the bio-reaction divides the cell populations into two.

This cell culture experiment demonstrates that the fine and subtle manipulation of the initial cell states, through the regulation of gene-overexpression levels, results in the generation of programmable bimodal distribution from monomodal distribution.

The team's mathematical analysis further suggests that the reprograming strategy can be applied to various types of natural gene networks. 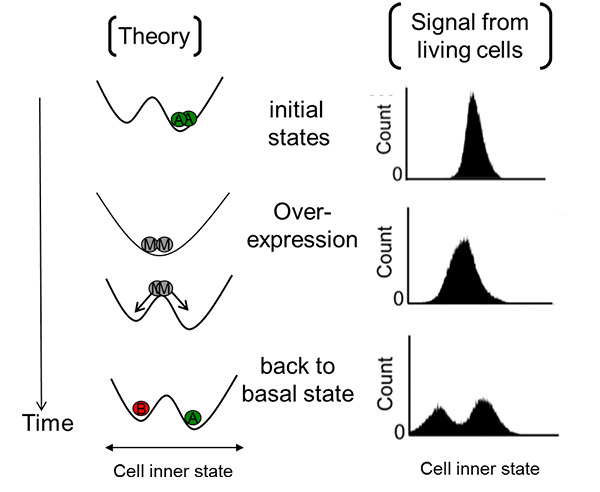