Tokyo Tech's ongoing education reforms toward the implementation of the new education system in April 2016 include the improvement of the educational environment. As part of this effort is Tokyo Tech Lecture Theatre. Leading-edge Tokyo Tech researchers and internationally renowned scientists and inventors from home and abroad will give lectures which feature open experiments and debates primarily targeting 1st-year undergraduate students.

In connection with Homecoming Day 2015 at the Ookayama Campus on May 23, the Lecture Theatre hosted the first of a series of "Magic Class" lectures for high school students. Despite the unfortunate overlap with mid-term examinations, over 130 high school students participated.

After the opening speech from Vice President for Education and International Affairs Toshio Maruyama, Institute Professor Akio Hosoya kicked things off with a lecture entitled "The moon was created in one month." 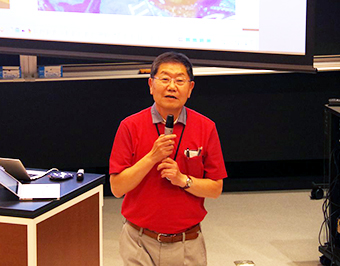 "Are there any students in the room today who haven't seen the moon?" Hosoya began. After a lengthy silence, he continued. "Of course not, suggesting something of that sort would be lunatic."

Earth is the only planet with such a large moon relative to its size, and the radioisotopic composition of moon rock is exactly like that found on Earth. How can that be? The giant impact hypothesis suggests that, approximately 4.5 billion years ago, an astronomical body the size of planet Mars collided with Earth, spewing debris into space. This debris then gathered to form the moon we know today. It sounds unbelievable, but it is a theory supported by results of computer simulations, Hosoya explained. At pivotal points of the lecture, graduate student Yuhito Shibaike helped with supplementary explanations and assisted in answering questions from the audience. 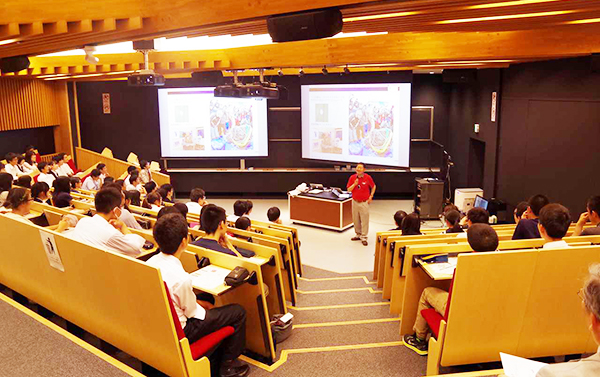 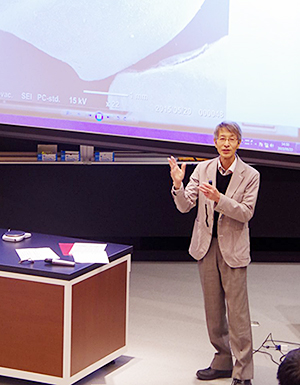 After Hosoya's lecture, Institute Professor Hitoshi Tokura continued with his talk entitled "Grains of Wonder." Tokura explained that grains are everywhere. Some grains, like the sand in an hourglass, are visible, and other grains, like those in car paint, are not. While introducing students to the scanning electron microscope, he demonstrated the ever-changing characteristics of grains and explained how this makes their application extremely varied.

"Let's try to measure how compact grains can get. I am going to pack this cup as full of rice grains as I can. Next, I will add water and see how much the weight increases."

The audience was satisfied with the results, all viewable with the ceiling visualizer. Even after the lecture, many students were still gathered around the electron microscope, clearly intrigued. 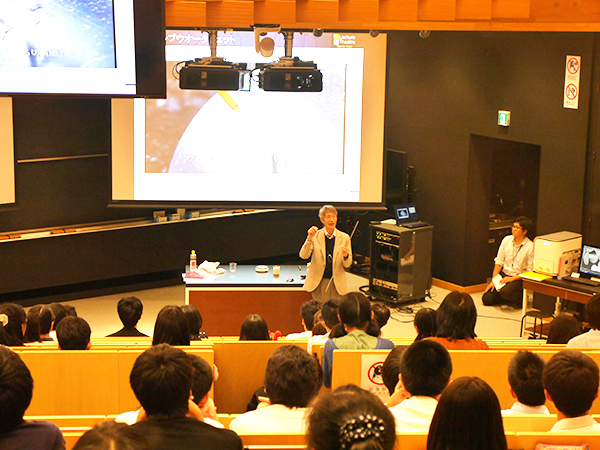 Based on the post-lecture questionnaire, the opening session at the new Tokyo Tech Lecture Theatre was a success. Students showed great enthusiasm for exploring potential future fields of study while being exposed to the Tokyo Tech environment. The bar has been set high. The Institute strives to continue producing lectures, each more thrilling than the last, that arouse the interest of the audience and allow everyone to enjoy the wonders of science and technology.

Program for Frontier Science and Technology