A magnitude 7.8 earthquake occurred in Nepal on April 25, 2015 with the epicenter in Barpak village, Gorkha district, 77 km north-west of Kathmandu. This was followed by a major aftershock of magnitude 7.3 on May 12, 2015 with the epicenter 18 km south-east of Kodari village, Sindhupalchowk district. The number of fatalities due to both earthquakes was more than 8,000 and the economic loss is estimated to be USD10 billion. The last major earthquake in Nepal, an 8.4 magnitude tremor in 1934, caused the loss of almost 30 percent of the population of Kathmandu alone.

A team from Tokyo Tech carried out a field survey in Nepal from June 1 to 8, 2015 to investigate the damage caused by the recent earthquakes. The team — led by Civil Engineering Associate Professor Anil C. Wijeyewickrema — included the following seven Tokyo Tech students, six of whom are Nepalese:

Although Nepal is in a seismically active region, due to economic conditions of the country, most of the older structures had been constructed with little or no consideration of seismic effects. The main objectives were to assess the extent and nature of damage caused by the earthquakes, especially in Kathmandu valley (Kathmandu, Bhaktapur, and Lalitipur districts) and Sindhupalchowk district (with the largest number of casualties) and to propose seismic mitigation measures for structures. The team also investigated geotechnical damage such as landslides, settlement of ground, and liquefaction caused by the earthquakes.

From the field survey, it was determined that the major reasons for damage to structures were poor construction practices where seismic design guidelines had not been followed, as minor or no structural damage was observed in well-engineered buildings. Cultural heritage sites that suffered heavy damage were the old monuments without proper maintenance and where necessary retrofitting measures had not been adopted. In addition, the need for proper testing of soil properties and ground improvement prior to construction were greatly felt.

A comprehensive report of the field survey including chapters on damage to structures, geotechnical damage, and disaster relief and humanitarian aid is available on the Anil lab webpage 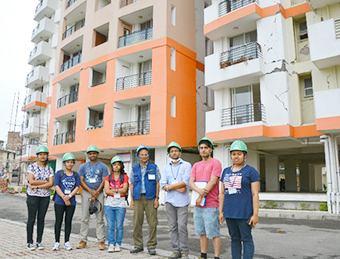 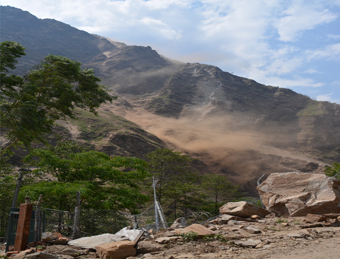 Active landslide along Araniko highway between Dolalghat
and Tatopani