A campus tour was held on June 2 as part of the orientation for inbound students participating in the 2015 Tokyo Institute of Technology International Research Opportunities Program (TiROP) Summer Program.

TiROP is a joint educational and research exchange program funded by the Re-Inventing Japan Project of the Ministry of Education, Culture, Sports, Science and Technology (MEXT). The program was organized to promote student mobility through exchanges with top universities of science and technology in Asia, Europe, and the U.S. TiROP provides a platform for selected undergraduate and graduate students of participating universities to undertake lab research and/or coursework in the summer, or for up to one year, under the joint supervision of academic advisors from both students' host and home universities. The program offers an unequalled opportunity for participants to establish networks with fellow students in the same field of expertise from around the world. 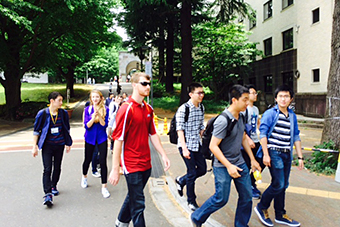 At the first stop of the tour, students had a chance to look inside the Second Cafeteria and receive explanations about the menu options. They also visited the University Co-op Shop next to the dining hall to examine textbooks and Tokyo Tech goods. The tour continued across campus to the First Cafeteria, where the group ate lunch. Curry rice, a staple of Japanese cafeterias, was of particular interest due to its marked difference from Indian and other Asian curries. After lunch, the tour continued to the Institute Library. TiROP students were impressed by Tokyo Tech's innovative group study and discussion spaces and amused by the library's unique shape, which resembles a slice of cake. The students then visited the HUB-International Communications Space (HUB-ICS) where staff and students of all backgrounds come to relax and enjoy conversations in English and other languages, meet new friends from around the globe, and get involved in international debates and discussions. ICS staff described popular events such as English Café and the weekly Think Aloud! LUNCH, and encouraged students to take advantage of the international news media available. The tour concluded with a visit to the Gymnasium where students were shown the training equipment and other recreational facilities. 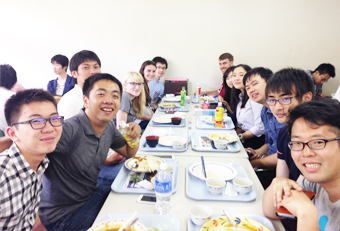 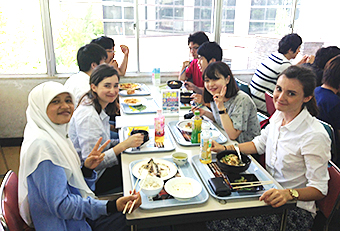 Lunch in the cafeteria

Tran Duy Thach, a first-year doctoral student in the Department of International Development Engineering, School of Engineering, was the leader of the campus tour. Thach, who is from Vietnam, will conduct research at Georgia Institute of Technology for three months from August 2015 under the TiROP outbound program.

Following the tour, Thach commented, "a good time was had by all as TiROP inbound program students conversed with their Tokyo Tech peer advisers and TiROP outbound students during the Ookayama campus tour. As it was the first time for many of the TiROP inbound students to visit Tokyo Tech, they were pleased to see the various facilities and were especially interested in the library. In addition, the tour was the first time for some of the inbound students to meet, so I think it provided a good opportunity for the participants to get to know each other better."

Furthermore, the peer advisers enjoyed a chance to interact while taking a break from their lab work and classes. "We had a great time making friends with students from other countries." 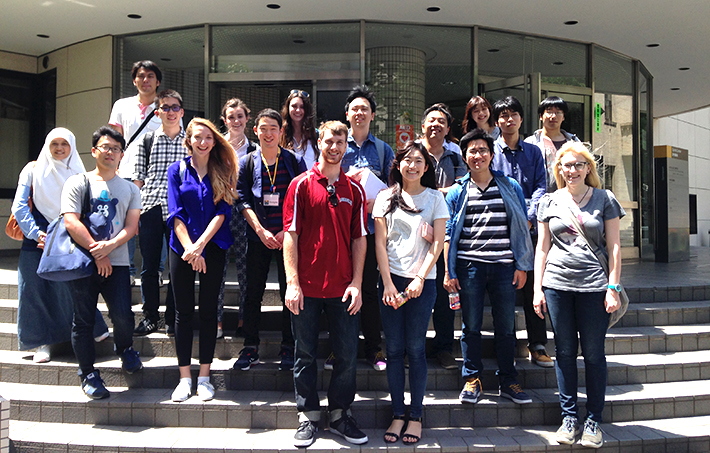