Most organic fluorophores suffer from substantial fluorescence quenching in the solid state (aggregation-caused quenching). For decades, this characteristic feature has often been considered a bottleneck for practical applications. In 2001, a new design strategy for efficient solid-state fluorophores, namely aggregation-induced emission (AIE), was proposed by Ben Zhong Tang (Hong Kong University of Science & Technology). Specifically, they reported that AIE was caused by the restriction of non-radiative decay through intramolecular vibrational/rotational relaxation without energy/electron transfer fluorescence quenching. Since their report, traditional concepts for luminescence mechanism of organic fluorophores have changed dramatically. AIE luminogens have found many applications, not only in organic light-emitting diodes (OLEDs), but also in environmentally responsive fluorescent probes, which are sensitive to aggregation and self-assembly. Today, a wide variety of AIE luminogens are known. In order to expand the potential applications, AIE luminogens should be small in size, and should possess a simple structure that can accommodate further modifications. However, most fluorophores exhibit more complex and complicated structures.

Here, Shunsuke Sasaki and Prof. Gen-ichi Konishi (Tokyo Institute of Technology) and Prof. Kazunobu Igawa (Kyushu University) report new AIE luminogens, 1,4- or 9,10-bis(piperidyl)anthracenes (BPA) (Figure 1), which have several advantages including a simple molecular structure, facile synthetic accessibility, solid-state fluorescence with a high quantum yield (QY), tunable emission color, and large Stokes shift. BPA dyes can be synthesized in one step using commercially available reagents and catalyst. The fluorescence QY of 9,10-BPA is only 2%, but it exhibits efficient emission in the solid-state due to aggregation, with an enhanced QY of 86%. Moreover, the emission color of the dyes can be tuned by modifying their structure, as 9,10-BPA is green and 1,4-BPA is orange-red (Figure 2). Functionalization of these AIE luminogens is now in progress in our laboratory, and will hopefully lead to numerous applications in bio-imaging, OLEDs, and as mechanochromic polymer materials.

This paper was highlighted by Prof. B. Z. Tang in ACS Noteworthy Chemistry (22 June 2015), a news weekly published electronically by the American Chemical Society. 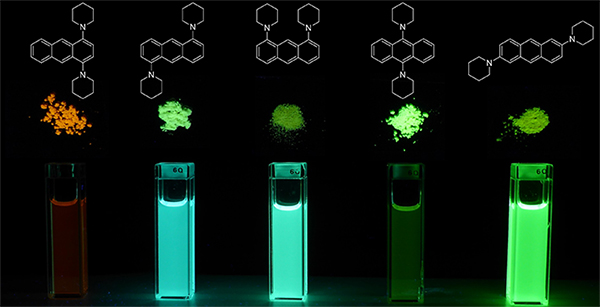 Figure2. Fluorescence of bis(piperidyl)anthracenes in solution and bulk.