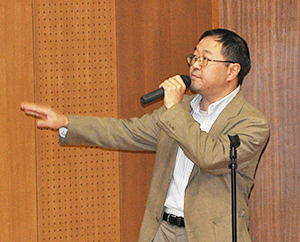 Under the new education system to be implemented in April 2016, Tokyo Tech will establish the Institute for Liberal Arts (ILA) to offer integral liberal arts education to all students. To kick off its establishment, a symposium took place on July 6, 2015 at the Ookayama Campus. Over 100 Tokyo Tech students, faculty, staff members, and participants from other institutions attended, and presentations on the principles of ILA were accompanied by vigorous discussion. Professor Taro Yamazaki from Tokyo Tech's Foreign Language Research and Teaching Center moderated the symposium. 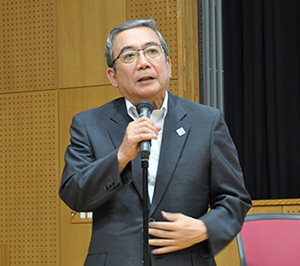 President Yoshinao Mishima began the symposium by giving an overview of the ongoing education reform, emphasizing liberal arts as one of the essential pillars in the new curriculum. Tokyo Tech has for a long time taken pride in its unique liberal arts education, and providing it in its best possible form to today's students is a keynote of the education reform. Mishima showed great enthusiasm for ILA, expressing confidence in its ability to fulfill an important role in the new education system. 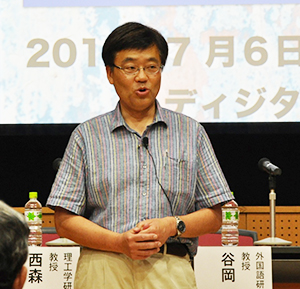 Universities should be at the forefront of changing the world in the 21st century rather than passively respond to society's needs. This is how Professor Noriyuki Ueda, deeply involved in the preparation of ILA, and other faculty members felt after visits to MIT, Harvard, and other world-leading universities. This sentiment is the driving force behind ILA's new curriculum, Ueda noted.

After introducing several of the unique liberal arts courses to be launched in April 2016, Ueda expressed his hope that the ILA would enhance students' communication skills, encourage their initiative, and guide them towards becoming individuals with heightened social awareness and a strong spirit.

To get help with preparation of the new curriculum, the ILA working group put out a call for kickoff volunteers with an interest in liberal arts. Over ten Tokyo Tech students responded, joining the active learning workshops led by Professor Takehiko Tanioka of the Foreign Language Research and Teaching Center. Five of them delivered talks at the symposium about what they had learned.

Introducing themselves by the nicknames given to them during the workshops, students presented their relationship with and impression of the liberal arts. Story, encounter, humanity, chemistry, independence — these were some of the words associated with the topic, reflecting the students' individual personalities. Students also shared their opinions regarding the active learning method and their hopes for liberal arts education in the future.

In the fall 2015 semester, the ILA working group plans to launch tentative liberal arts courses which will function as final rehearsals before the implementation of the new curriculum in spring 2016. 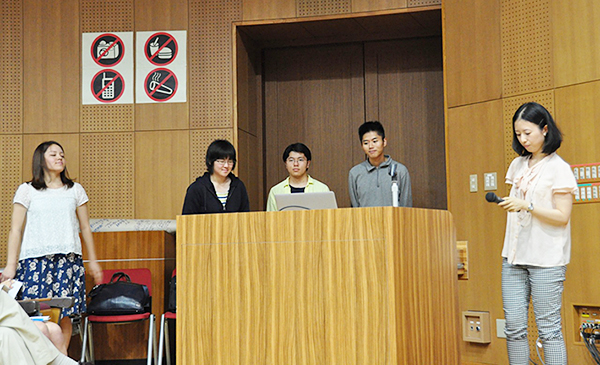 A panel discussion aimed at getting input on liberal arts education from professors specializing in different fields followed. Panelists included Professor Nishimori from the Graduate School of Science and Engineering and three faculty members to be affiliated with ILA — Professor Tanioka, Professor Hayashi, and Associate Professor Ito. Ueda moderated the discussion. 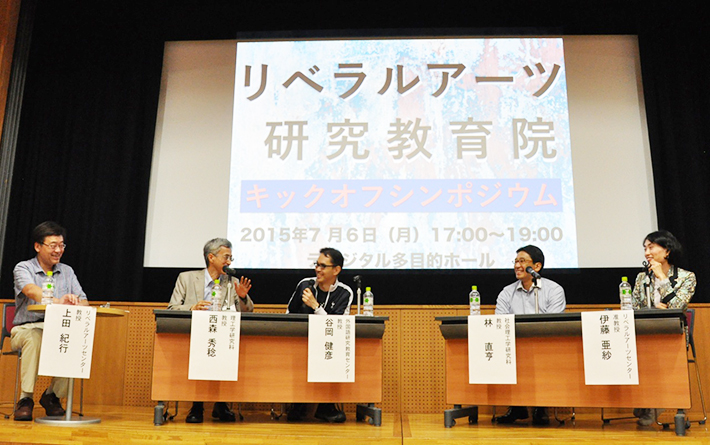 Nishimori started off by throwing a big question in the air: what is meaningful learning? He went on to explain that, based on his experiences in his academic field, learning may initially seem tedious and uninteresting, but if one takes the time to get a proper grasp of the topic in question, things start to change.

On the basis of his active learning experiences with the student volunteers, Tanioka shared his views on what makes proactive independent learning possible. One example he gave was his participation in the workshops under a nickname, just like his students — an experience that prompted a rethink of faculty authority.

Hayashi shared his view on the significance of liberal arts courses using "valuable" and "useless" as keywords in his talk. Many people, for example, tend to consider literature useless. However, if one can relive things by reading novels and thereby foster one's resilience against failure and disappointment, literature becomes very valuable. Health and sports courses can be considered equally valuable as they provide basic knowledge on how to prevail from a physical point of view, Hayashi explained.

Ito highlighted one important factor in the new curriculum as the connection among students themselves. She shared her view that the objective of group work is not integrating with others, but rather recognizing the differences of opinion among group members. In terms of the faculty-student relationship, the main role of the expert is not simply to illustrate points in a comprehensible way, but to be present when thinking about these points together, Ito suggested.

Individual talks were followed by active discussion. The panel especially focused on the crucial balance between freedom and restriction. Although required courses provide the core of the studies, the new curriculum greatly emphasizes students' independence. The panel recognized that, within a certain necessary framework, giving students a free hand and encouraging them to find their own way is the linchpin of the new curriculum.

The latter half of the panel discussion centered on diversity. The panel stressed that one of the goals of liberal arts education is to have students realize and accept the rich dimensions of diversity.

To finish off, panelists replied to questions from the floor and responded to students' comments and opinions. In terms of the implementation of the new liberal arts education system at Tokyo Tech, the symposium was of great significance. 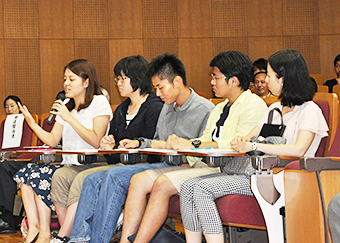 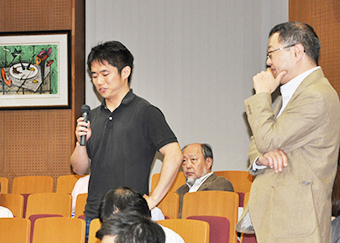 Question from the floor