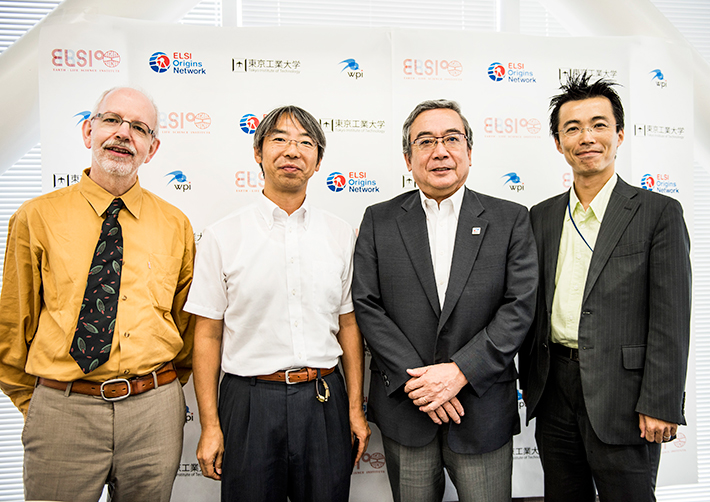 Where, when, and how did life arise on Earth, and has it happened elsewhere in the universe? These fundamental existential questions are at the forefront of scientific inquiry in an age where remarkable advances in biochemistry, astronomy, earth science, and computation are bringing some of the answers tantalizingly close.

The Earth-Life Science Institute (ELSI) at Tokyo Tech, already a leader in the quest for life's origins, announced today that it has been awarded US$5.6 million by the John Templeton Foundation to create a unique global scientific network, the ELSI Origins Network (EON), to further advance these efforts.

"We are honored that the John Templeton Foundation has decided to support this project with ELSI as its base. This substantial grant will help ELSI achieve its scientific and reformative goals of the World Premier International Research Center Initiative (WPI), introducing a fresh effort to Tokyo Tech. The new EON program will bring focus and original ideas to some of the deepest and most exciting scientific questions of our time," said Yoshinao Mishima, President of Tokyo Tech.

Commented Hideki Iwabuchi, Director, Office for Basic Research Programs, Research Promotion Bureau, Ministry of Education, Culture, Sports, Science and Technology, "ELSI was established in 2012 and has been supported by the World Premier International Research Center Initiative (WPI) of the Japanese government. The WPI program is designed to promote world-class science in Japan and its international visibility. In just two and a half years, ELSI has established itself as a world-renowned institute, worthy of this valuable recognition from an international foundation such as the John Templeton Foundation. We congratulate ELSI and look forward to the exciting advances and successes in science that will result from this generous support."

At its inception, EON will tackle three overarching questions: How did life emerge on Earth? How common is life in the universe? Are there notions of cause, chance, and necessity that unify life science and the physical sciences into a larger coherent framework for understanding nature?

Kei Hirose, ELSI's Director commented, "Study of the Origin of Life is still a young and fragmented field of research, and the question it aims to address is much larger in scope than traditional scientific disciplines. ELSI at Tokyo Tech is an institution that is uniquely devoted to Origin of Life studies, considering the environments on the early Earth, and we have learned that progress on this problem requires collaboration with many researchers from various disciplines around the world. This generous support for EON from the John Templeton Foundation enables us to form a larger global and interdisciplinary network with ELSI as a hub, and furthers our goals of understanding the Origin of Life from an inter-disciplinary perspective."

"Our founder, the late Sir John Templeton, was interested in big questions about the nature and origins of life to understand where we come from and our place in the vast cosmos," said Ayako Fukui, Assistant Director for Strategic Program Initiatives at the John Templeton Foundation. "We believe that ELSI is well positioned to carry out this ambitious initiative, especially with support from the Japanese government and collaborators around the world and across disciplines. Our hope is that EON's strategic interdisciplinary efforts to codify the field will provide a much needed framework for origins of life research."

Among EON's primary goals is to support a new generation of origins scientists, and the project will fund up to 10 postdoctoral researchers who will spend half of their time in Japan and the other half abroad. EON will also provide seed funding for collaborations between scientists in different countries; funding and facilities for scientists and students to visit Japan; and a dynamic program of scientific workshops and public outreach.

EON Director, Piet Hut of the Institute for Advanced Studies in Princeton and Principal Investigator at ELSI explains, "One of our key goals is to unify the international origins of life community by seeding and nurturing research, training scientists, and providing a stimulating and exciting meeting place. ELSI at Tokyo Tech is perfectly situated for this, as one of Japan's visionary World Premier International institutes, with a vigorous and talented staff already engaged in cutting-edge research, in an environment that fully supports the scientists' needs."

The initial EON project will run for 33-months. By bringing together existing ideas from different sciences to shape each other's development, the John Templeton Foundation's generous support will help create a collaborative research community with global vision, which can recognize and ask the next generation of questions to the origins of life field.

"EON will contribute significantly to the growth and integration of the international Origins of Life research community by enabling exchange of people and ideas. We are looking forward to strengthening our ongoing collaborations with ELSI through the opportunities that EON will promote," commented Jack W. Szostak, Professor of Chemistry and Chemical Biology, Harvard University, Principal Investigator at ELSI, and recipient of the 2009 Nobel Prize in Physiology or Medicine.

NASA Astrobiology Program Director Mary Voytek, who will participate in EON as a Global Science Coordinator said, "ELSI recognizes that the quest to understand our place in the universe is a global effort involving all of humanity. EON promises to create a hub for international origin of life research in Japan. NASA's Astrobiology program applauds this exciting new endeavor and hopes to participate in any way we can."

About the Earth-Life Science Institute

The Earth-Life Science Institute (ELSI) of Tokyo Tech was launched in December 2012 as part of the World Premier International Research Center Initiative (WPI) of the Ministry of Education, Culture, Sports, Science and Technology (MEXT.) The WPI grant is awarded to institutes with a research and administrative vision to become globally competitive centers that can attract the best scientists from around the world to come work in Japan. ELSI's research mission is to elucidate how the Earth was formed and how its early environment allowed for the rise of initial life and its subsequent evolution to complexity. What distinguishes ELSI from other institutes studying the origins of life is its emphasis on placing the study in the context of the specific physico-chemical environment of the early Earth.

About the John Templeton Foundation

serves as a philanthropic catalyst for discoveries relating to the Big Questions of human purpose and ultimate reality. The Foundation supports research on subjects ranging from complexity, evolution, and infinity to creativity, forgiveness, love, and free will. It encourages civil, informed dialogue among scientists, philosophers, and theologians and between such experts and the public at large, for the purposes of definitional clarity and new insights. The Foundation's vision is derived from the late Sir John Templeton's optimism about the possibility of acquiring "new spiritual information" and from his commitment to rigorous scientific research and related scholarship. The Foundation's motto, "How little we know, how eager to learn," exemplifies its support for open-minded inquiry and its hope for advancing human progress through breakthrough discoveries.