Bringing plasmas into the surgery room

Plasma—one of the four main states of matter, in addition to solid, liquid, and gas—is most commonly observed as natural phenomena such as lightning and auroras, or is artificially produced in the form of neon lights. However, there are numerous potential industrial, chemical, and medical applications of plasmas. In the medical field, for example, plasmas have great potential in wound healing, bacterial inactivation and even in cancer treatment.

The need for smaller plasma sources

To use plasmas in many areas of biomedicine, a drastic reduction in the size of the plasma source is required. Unfortunately, conventional manufacturing processes used to make artificial plasma sources, such as welding, cannot successfully create plasma sources small enough to be useful in these applications. However, researchers at Tokyo Tech have recently succeeded in using 3D printing technology to create miniature devices able to create plasmas at room temperature.

The revolution of 3D printing

3D printing works by taking either a virtual image designed by the user or a 3D scan of the object to be reproduced. The 3D image is then broken down into many 2D 'slices', which are printed layer-by-layer to form the final 3D object. This technology has brought about a revolution in manufacturing, enabling the production of an exhaustive range of materials, from components used in the automotive, aeronautical, and construction industries, to human organs.

Researchers bring everything together

As reported in their recent article in AIP Advances, Takamatsu and co-workers successfully designed and printed a miniature device composed of titanium electrodes insulated by a plastic resin by using two 3D printers to print the metallic and plastic components. Remarkably, the plasma source had a total body length of just 60 mm and generated a plasma through a hole just 0.5 mm in diameter. 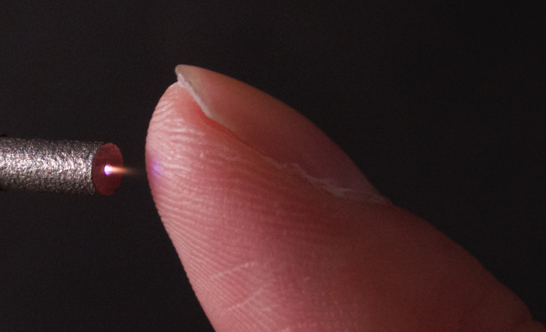 Although the researchers had previously fabricated plasma sources on a similar length scale, the previous models suffered from insufficient power input and excessively high gas flow rate, making them unfeasible for applications such as bacterial inactivation and surface cleaning. The newly-developed device overcomes these drawbacks and may be implemented in a wide range of important biomedical applications in the near future.