Searching for the origins of RNA

Structure generation software allows scientists to begin exploring the types of nucleic acids that could have existed before, alongside, or indeed instead of, ribonucleic acid (RNA) and DNA.

Two of life's essential 'building blocks' are DNA and RNA, forms of nucleic acid which carry genetic information from one generation to the next. RNA, or ribonucleic acid, is a polymer composed of repeating monomers of nucleotides, which are themselves composed of the sugar ribose, a phosphate group, and a nitrogen heterocycles. RNA thought to be a primordial molecule, and many researchers feel that understanding its origin is of key importance to understanding the origins of life. However, despite its central role, surprisingly little is understood about where RNA actually came from. No studies to date have succeeded in generating RNA in a one-pot reaction from simpler starting materials, although this does not mean that simpler nucleic acids did not exist before RNA.

Henderson James Cleaves II at the Earth-Life Science Institute (ELSI) of the Tokyo Institute of Technology, together with scientists in Germany and the US, generated and examined all the possible isomers of RNA nucleosides. They wanted to determine where RNA might sit in terms of its 'structure space' — the number of possible molecular structures that could exist given certain defining parameters. Their findings suggest RNA may have competed with multiple other structures before becoming the central molecule in biology it is today.

Using structure-generation software, Cleaves and his team uncovered 227 different isomeric structures, as well as scores of simpler analogues, which could potentially serve as building blocks for RNA-like molecules. They selected the structures following a careful screening of the total number of possibilities which could be derived from the ribosides' formula. They chose structures that were likely to remain stable in certain conditions (moderate pH and temperature for example), and those with at least two functional groups which would allow the monomers to become part of more complex, linear polymers.

Their results raise many questions, and suggest RNA may not have been alone in its ability to carry genetic information in the distant past. Hardly any of the 227 structures in this set have been previously investigated, and so their ability to carry out genetic inheritance functions is unknown. Cleaves' team call for further research into this huge RNA 'structure space' to explore these findings further.

RNA and its disputed origins

Ribonucleic acid (RNA) plays a central role in conveying genetic information in cells. It is likely that both RNA, and its partner DNA, evolved as the optimal approach for this task, given certain defining parameters such as the ability to function and remain stable in small cells. Nature's solutions were RNA and DNA, in this instance, but the outcome could have been different had other versions of these molecules dominated during the early days of life on Earth.

So far, no one-pot reaction has been able to recreate RNA monomers in the laboratory using simple prebiotic materials. This scenario has led to dispute within the field as to whether or not RNA is a 'unique' molecule, all alone in its own 'structure space'. This is the first study to examine all of the possible isomers that can be created from RNA's basic chemical formula: BC5H9O4, where B is the nucleobase).

With a given set of ingredients, it is possible to create many different combinations. In the case of RNA, the constituent components of carbon, hydrogen and oxygen, together with the base-sugar complex, can create many different molecular forms. Isomers are molecules which have the same chemical formula (or the same ingredients), but the individual atoms are arranged in different ways within the molecule. The total number of possible forms a molecule with the same chemical formula can take, within certain defining parameters, is known as the molecule's 'structure space'.

This research is the first to attempt to define RNA's 'structure space' — to elucidate the total possible isomers of ribosides that could form the basis of RNA-type molecules. Cleaves and his team uncovered 227 structures likely to survive in moderate environments, which may have similar functions to RNA. Most of these structures have never been scientifically described or studied.

The findings of this study imply that RNA may have competed with a large number of alternative nucleic acids during biological evolution to become the key nucleic acid it is today, and alternate evolutionary outcomes could occur on other planets. The authors urge further work in this area, and suggest caution should be taken in assuming that RNA was unique in its 'structure space' in the early stages of life on Earth. 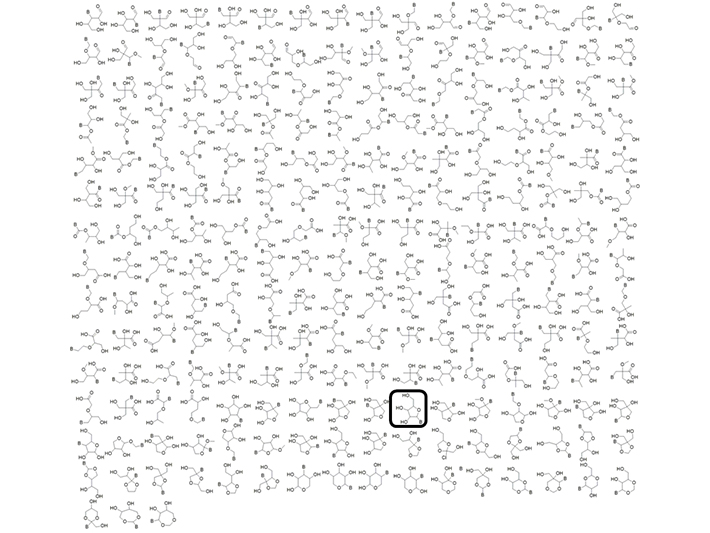 Figure. The 227 isomers of RNA computed by the researchers.
The biological isomer is highlighted with a black cartouche. Some of these may have interesting and as yet unexplored chemical properties.