Studies by researchers at Tokyo Institute of Technology demonstrate a way of tapping into the potential therapeutic properties of carbon monoxide by using light to regulate release from protein cages inside cells.

Low concentrations of carbon monoxide (CO) activate certain proteins that, rather than acting as a toxin, may have beneficial anti-inflammatory effects. As a result there is a lot of interest in developing molecules capable of controlled release of CO to study its effects in the body and exploit potential therapeutic applications. A team of researchers at Tokyo Institute of Technology has now controlled the release of CO from a composite of biocompatible ferritin cage and manganese carbonyl complexes (MnCO) inside cells using visible light, reporting, "This represents the first example of a photoactive CO-releasing molecule conjugated to a protein."

In 2002 Motterlini and colleagues demonstrated that light could trigger carbon monoxide release from manganese carbonyl molecules - Mn2(CO)10. However, despite active research on the carbon-monoxide-releasing attributes of MnCO, there have been few reports of light-regulated CO release inside cells.

Kenta Fujita, Yuya Tanaka, Satoshi Abe, and Takafumi Ueno based their studies on ferritin — an iron storage protein that is found in almost all living organisms. By modifying the peptide structure of the ferritin they could encourage the retention of over 40 MnCO moieties.

They demonstrate the release of CO in response to visible light in cellular assays, as well as an activation of a nuclear factor κB, which is associated with the therapeutic effects of CO, under a presence of tumour necrosis factor α.

In addition they identify the duration of irradiation that optimises activation of the nuclear factor κB. They conclude in their report that protein cages have great potential for use as photoactive CO-releasing molecule carriers, adding, "Moreover, the strategy used here can be extended to other protein assemblies with various structures and sizes."

While in excess CO shows toxicity, regulated quantities have beneficial effects as an anti-inflammatory, vascular dilation, and redox control in living organisms. CO is generated naturally in living organisms during the degradation of heme, which is an iron-containing compound found in a range of proteins including haemoglobin, the red pigment that gives blood its colour.

Since Motterlini's work on Mn2(CO)10, there has been a lot of work on developing light-triggered CO-releasing molecules (CORMs) based on manganese, iron, ruthenium, and rhenium-carbonyl complexes. Researchers have also investigated carrier systems to make these CORMs more stable in an aqueous solution. However the work by Ueno and colleagues reported here is the first demonstration of regulated CO release with visible light irradiation from a biocompatible protein inside living cells.

Ferritin is a cage-like protein consisting of 24 self-assembled polypeptide units. It is found in living organisms and stores iron. Cellular uptake of ferritin has already been demonstrated.

The researchers introduced a binding site of MnCO into the ferritin by replacing Arg with Cys at position of 52 in the polypeptide sequences of ferritin. This resulted in high retention of MnCO. In contrast unmodified ferritin does not retain MnCO. Using confocal microscopy, the researchers demonstrated that CO was released from the composite of ferritin and MnCO by visible light irradiation in living cells.

Nuclear factor κB (NF-κB) regulates a variety of genes associated with inflammation. It has been suggested that CO is related to an activation of NF-κB to induce anti-inflammatory response. However, investigating these effects requires a means of controlled CO release inside cells, which has so far been a challenge.

The researchers monitored the activation of NF-κB in HEK293/kB-Fluc cells using a luciferase reporter assay system. They observed NF-κB activation in living cells that had been treated with the composite of ferritin and MnCO, while the NF-κB was not activated in Mn2(CO)10-treated cells. It is demonstrated that the MnCO is retained in the ferritin for functionalizing in living cells. The presence of tumor necrosis factor α is also necessary for NF-κB activation and ongoing work will look into the relationship between CO release properties of photoactive CO-releasing ferritin and tumor necrosis factor. 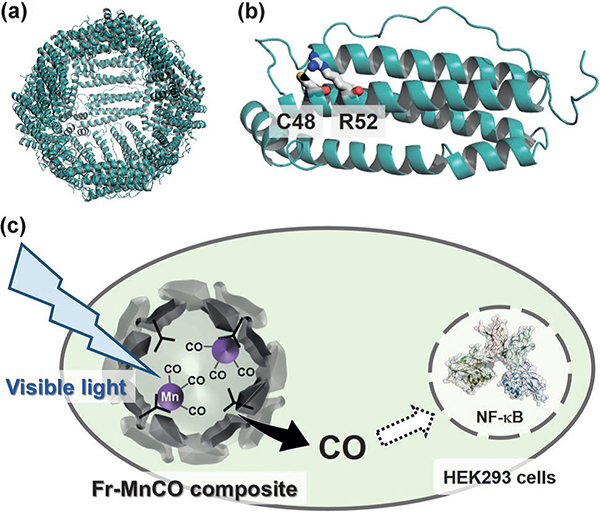 Figure. An intracellular photoactive CO-releasing system based on ferritin (Fr). a) Crystal structure of Fr for the whole structure with the 24 polypeptides, b) and the monomer structure in which the two residues at positions 48 (Cys) and 52 (Arg) are represented as stick models. c) The release of CO from MnCO coordinated within the Fr cage is triggered by visible-light irradiation.