The Japan Society for the Promotion of Science has announced that the 2015 International Prize for Biology has been awarded to Honorary Professor Yoshinori Ohsumi of Tokyo Tech's Frontier Research Center.

The International Prize for Biology was instituted in 1985 to commemorate the sixty-year reign of Emperor Showa and his longtime devotion to biological research. It is awarded to researchers who have achieved excellent results in the field of biology at an international level and have made considerable contributions to the advancement of global science. 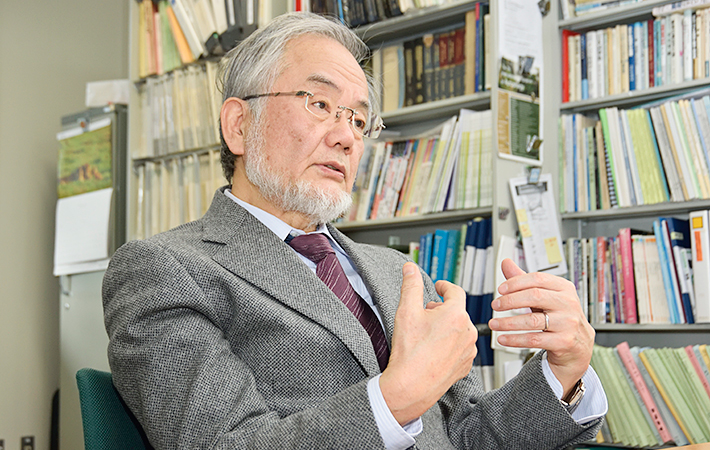 Ohsumi received the prize for his research in the field of autophagy. Starting his research when little was known about autophagy at the molecular level, he uncovered the mechanism by which the actions of multiple autophagy-related genes lead to autophagy. Ohsumi showed autophagy to be an essential life process widely conserved in nature and established it as a major new field in the life sciences.

The award ceremony held every December at the Japan Academy in Ueno, Tokyo, will be attended by Their Majesties the Emperor and Empress, who will also participate in the commemorative tea ceremony held with the award recipients.

The Ceremonial Symposium is scheduled to be held in Kyoto on the weekend of December 5-6.

I am truly humbled to have been awarded this year's International Prize for Biology. The International Prize for Biology was established to commemorate the sixty-year reign of Emperor Showa, who was a biologist himself, and to provide encouragement to researchers of biology. So far, thirty people have received the award, only six of whom were Japanese. Among these are Dr. Motoo Kimura, who was awarded the prize in 1988, and Dr. Setsuro Ebashi, who received his prize in 1999. Both are my esteemed predecessors who carried out their work in Japan and achieved glittering results. The honor of being included among people of this caliber is extremely sobering.

Autophagy is a degradation process of cytoplasmic constituents in the lysosome or vacuole. I originally focused on observing the process of autophagy using yeast. Then I sought to identify the autophagy-related (ATG) genes, also in yeast. This has resulted in a rapid and widespread increase in autophagy research in recent years, and we now know that autophagy is not only an intracellular mechanism essential for survival but also has a pathological role related to certain types of diseases such as neurodegenerative diseases and cancers. We are coming to understand that the degradation process in our body is no less important than protein synthesis in maintaining metabolic function. It is my intention to use my remaining research time to return to basics and seek out an answer to the fundamental question: what is autophagy? I also hope to play a part in encouraging younger generations interested in cell biology research to develop the field even further.

I would like to extend my deepest gratitude to the people who recommended me for consideration as an International Prize for Biology recipient and to those who nominated me. I would also like to express my heartfelt appreciation to the many colleagues who have worked with me on this research until now.

I was delighted and grateful to hear that Honorary Professor Yoshinori Ohsumi has been awarded the International Prize for Biology. Professor Ohsumi pioneered a completely new area of research in the life sciences, and his elucidation of the mechanisms and physiological functions of autophagy has established a sound foundation for its use in medical applications. Tokyo Tech has been instrumental in achieving preeminent research results in fields covering a wide range of sciences and technologies. Using this award as a catalyst, we intend to further strengthen our role as a leader in world pioneering research in the life sciences while also providing support for all the Institute's endeavors.