Studies of medaka fish raised on the International Space Station shed light on how bone responds to sustained exposure to microgravity.

Spending time in space in a reduced gravity environment can have lasting effects on the body. For example, it is known that gravity plays a key role in the correct formation and maintenance of bone structure. Studies have shown that astronauts experience a significant drop in bone mineral density when they have been on space missions, but the exact molecular mechanisms responsible for this are unclear.

Now, Akira Kudo at Tokyo Tech, together with scientists across Japan, have shown that medaka fish reared on the International Space Station for 56 days experienced increased osteoclast activity — bone cells involved in the re-absorption of bone tissue — likely leading to a subsequent reduction of bone density. They also found several genes that were upregulated in the fish during the space mission.

The team generated fish with osteoclasts that emit a fluorescent signal. They sent 24 fish into space as juveniles, and monitored their development for 56 days under microgravity. The results were compared with a fish control group kept on Earth.

Kudo and his team found that bone mineral density in the pharyngeal bone (the jaw bone at the back of the throat) and the teeth of the fish reduced significantly, with decreased calcification by day 56 compared with the control group. This thinning of bone was accompanied by an increase in the volume and activity of osteoclasts. The team conducted whole transcriptome analysis of the fish jaws, and uncovered two strongly upregulated genes (fkbp5 and ddit4), together with 15 other mitochondria-related genes whose expression was also enhanced.

Reduced movement under microgravity also has an influence. The fish began to exhibit unusual behavior towards the latter stages of their stay in space, showing motionless at day 47.

The findings provide valuable details of bone structure physiology and the abnormalities caused by the stress to the body at reduced gravity.

The impact of reduced gravity on bone tissues

Time spent in so-called 'microgravity' environments — where the force of gravity is considerably less than on Earth — can cause significant problems for the human body. Astronauts who spend a number of weeks in space have been shown to suffer from reduced bone mineral density, leading to skeletal problems. Other issues include problems with skin structure and a reduced ability to heal when wounded.

The precise molecular mechanisms responsible for loss of bone density are not yet fully understood. The current study by Kudo and his team is a first step towards uncovering the reasons why bone structure is affected. Their results show that osteoclast formation and activity in medaka fish increased after they spent more than two weeks in a microgravity environment. Osteoclasts are responsible for the re-absorption of bone tissue, resulting in demineralisation and decalcification of the skeleton.

Kudo and his team generated 312 modified fish whose osteoclasts and osteoblasts (cells responsible for bone formation) would emit two different fluorescent signals when activated. They sent 24 of the healthiest fish on a 56-day mission to the International Space Station (ISS), and retained a control group of modified fish on Earth.

The fish on the space station were filmed for the full two-month period in order to record unusual behavior stemming from time spent at reduced gravity. With help of the astronauts aboard the ISS, the team extracted genetic material from the fish at different stages of the process, alongside monitoring osteoclast/osteoblast activity. They performed X-ray analysis of the bones of the fish at day 56 to ascertain mineral density changes. Growth was also monitored, although overall growth tendencies remained the same regardless of gravity changes.

This study highlights the stress caused to bone structure (and the subsequent knock-on effects on functional ability) by microgravity. The researchers liken the situation to disuse osteoporosis on the ground. Their findings hold implications for longer space missions and the impact of microgravity on the human body. 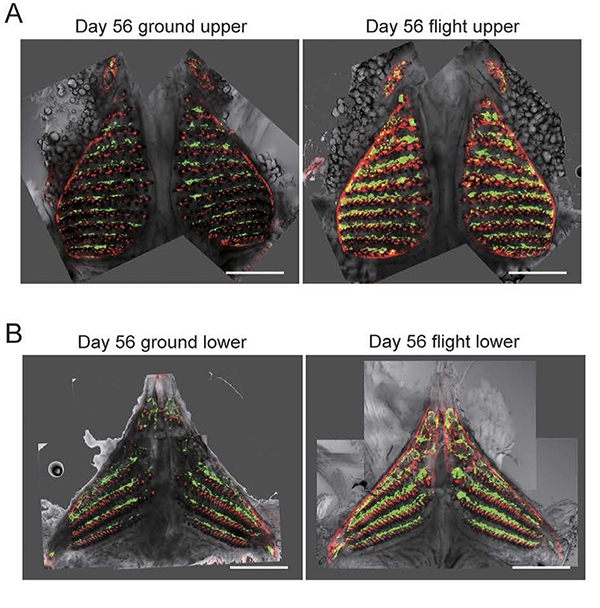 Figure. Comparison of fluorescent signals for osteoclasts and osteoblasts

Scientists at Tokyo Institute of Technology have shown how osteoclast volume and activity is enhanced in the upper and lower jaw bones of medaka fish after 56 days spent on the International Space Station. The team found subsequent reduction in bone density in the space fish compared with a control group of fish kept on Earth.