To introduce some of the exciting research taking place at Tokyo Tech, the Institute periodically hosts the Tokyo Tech Inspiring Lecture Series. The second event in this series, "Communication and Information Technologies - Innovating Optical Communications for the Internet Society," was held on June 12, 2015. In the spotlight this time were Tokyo Tech's Honorary Professor Yasuharu Suematsu and world-leading researchers from Sweden and Denmark. 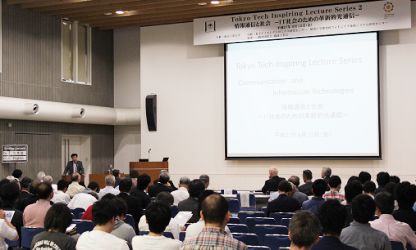 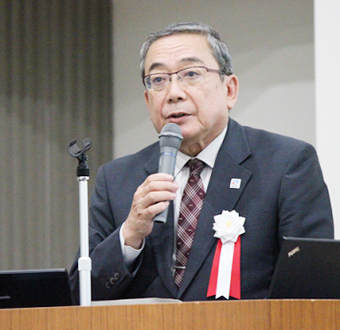 Over 160 people, ranging from college students to working adults, joined the event to listen to lectures by four distinguished researchers.

From the viewpoint of creating a new information and communications society, Suematsu looked back at the history and development of innovative optical fiber research. With many photos and abundant data, he presented the audience with precious records of the world's first demonstration of optical fiber communication, performed by Suematsu at the 1963 open-house anniversary of foundation event during which he transmitted laser light. In addition, he talked about a series of research findings and their impact on the dynamic single-mode laser. Suematsu led the research, which opened the way for high-capacity long-haul fiber-optic transmission.

2. Playing with photons and electrons "Bringing light to life"

Stubkjaer gave a lecture on the innovative technologies which have made optical fiber communication possible, touching also on his experiences at Tokyo Tech as a doctoral student. Stubkjaer introduced his research on optical signal processing, and spoke of the national photonics projects currently underway in Europe.

3. Tunable lasers from research to production - a personal view

Broberg talked about his lifework — tunable semiconductor lasers — which are now widely used in optical communication networks, and his experiences in launching entrepreneurial ventures. He mentioned the starting point of his laser research as being the one year he spent at Tokyo Tech, showing photos from the time. By providing real examples of his own failures and successes in founding a company, Broberg sent a valuable message to the aspiring entrepreneurs in the audience.

Kawano's lecture focused on new sensing and imaging technologies through the use of terahertz waves, which lie in the region between light and radio waves. He introduced cutting-edge research findings which exploit characteristics of low-dimensional nanoelectronics materials such as two-dimensional electron gas in semiconductors and carbon nanotube graphene. Kawano expressed his vision for the future and ambitions for the development of single bio-molecule detection and other applications.

The lectures were followed by a lively Q&A session during which audience members asked questions on a wide range of topics — founding a venture business, heading a laboratory as a principal investigator, information and communication, energy affairs, and advice for young researchers. 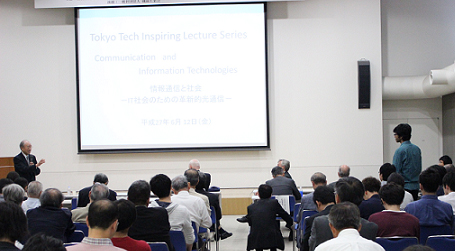 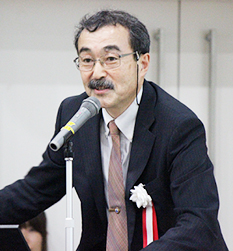 Make sure to join future Tokyo Tech Inspiring Lecture Series events and learn about the cutting-edge research being conducted at the Institute.