Tokyo Tech Professor Hiroshi Kimura of the Graduate School of Bioscience and Biotechnology has received the 2015 Robert Feulgen Prize. Kimura gave a special lecture about his research at the 24th Wilhelm Bernhard Workshop on the Cell Nucleus, held in conjunction with the 57th Symposium of the Society for Histochemistry in Vienna, Austria. 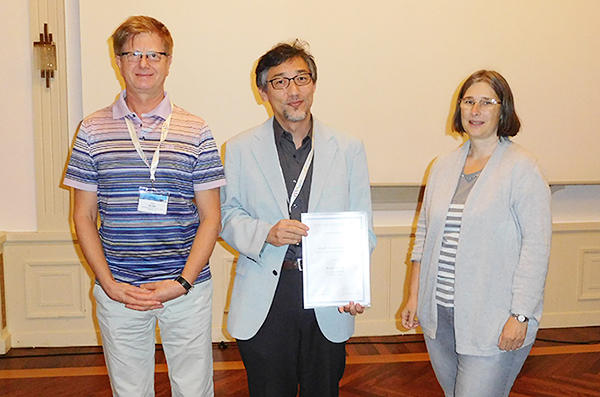 The Robert Feulgen Prize was established in 1971, awarding outstanding achievements in the field of histochemistry. The contributions may be either towards the development of new histochemical and cytochemical techniques or in the application of existing technology towards solving important problems in biology and/or medicine.

Development of visualization methods for post-translational protein modifications in vivo

The function of many proteins, such as protein-protein interaction and enzyme activity, is regulated through post-translational modifications such as phosphorylation, acetylation, and methylation in vivo. To detect these post-translational modifications at a cellular level, immunostaining with specific antibodies for certain modifications is used. With conventional immunostaining, cell and biological samples need to be chemically fixed, making analysis with living cells impossible. Using a probe derived from a monoclonal antibody, Kimura et al developed techniques to measure the dynamics of post-translational modifications of endogenous proteins in vivo. One of these methods involves fluorescently labeled antigen-binding fragments prepared from antibodies, which are loaded into cells. Another is the fluorescent protein fusion technique by cloning genes where antigen-binding sites are encoded. Using these methods, Kimura et al revealed the dynamics of phosphorylation, acetylation, and methylation of histones, the main components of chromatin and the dynamics of the phosphorylation of RNA polymerase II, an enzyme that transcribes genes. Also, the dynamics of histone acetylation in early embryos of mice and Drosophila was also elucidated.

Post-translational histone modification plays an important role in the regulation of gene expression, but the whole picture is still not clear. We are gradually learning the dynamics of histone modifications in cell and biological samples and how they act in regulating transcription. Developing more novel methods will enable us to solve the mystery of life phenomena.