Researchers at the Tokyo Institute of Technology have examined the UV absorption spectra of SO2 isotopologues, including all four stable sulfur isotopes (32SO2, 33SO2, 34SO2 and 36SO2), for the first time. By analyzing isotopic anomalies recorded in ancient sediments older than 2.5 billion years ago, their data gives insight into details of atmospheric chemistry on the early Earth.

Sulfur takes the form of 4 stable isotopes on Earth including 32S (95.05%), 33S (0.75%), 34S (4.21%) and the rarest, 36S (0.02%). The abundance of the three minor isotopic species relative to the most abundant, 32S, changes in nature. Normally, the enrichment factor of 33S is about half of that of 34S during most physical and chemical processes. However, in exceptional circumstances, a UV-induced photochemical reaction of SO2 is known to break this rule and produce an isotopic anomaly. Under 'anoxic' atmosphere conditions — an atmosphere with severely depleted oxygen - this isotopic anomaly is transferred into oceans and sediments through the deposition of sulfur aerosols. The isotopic anomaly is found only in sediments older than 2.5 billion years, suggesting that the atmosphere was anoxic at that time.

Previous paleoatmospheric studies have mainly focused on the isotopic anomaly of 33S. Anomalies formed by the rarest isotope, 36S, have not yet been studied in full.

Now, Yuichiro Ueno and co-workers have analyzed the UV-absorption spectrum of all isotopic species of SO2, including 36SO2, with the aim of predicting how environmental factors can change the pattern of isotopic fractionations.

The difference in the UV spectrum output for each isotopic species is very small, meaning that high precision analysis of the spectra is necessary. To achieve this, Ueno and his team spent time improving existing spectroscopic techniques to obtain high enough precision data.

Their results demonstrate that a so-called 'photodissociation' reaction of SO2 — wherein the molecule is broken down by photons - created the geologically-observed isotopic anomaly not only for 33S but also for 36S, when assuming irradiation by UV light of the solar spectrum Further, the researchers found that specific atmospheric conditions - like alterations in SO2 concentration for example - can change the pattern of the resulting isotopic anomaly. Therefore, environmental factors such as SO2 concentration, total atmospheric pressure and the redox condition of the early atmosphere can be decoded from the isotopic anomalies recorded in ancient sediments.

The work of Ueno and his team reveals which factors of atmospheric chemistry were controlling the pattern of the isotopic fractionation on the early Earth. The researchers hope that, in the near future, they will be able to give a quantitative estimate of SO2 concentration, total atmospheric pressure and redox state of the early Earth's atmosphere. They also aim to quantitatively determine how isotopic anomalies change depending on these environmental factors. 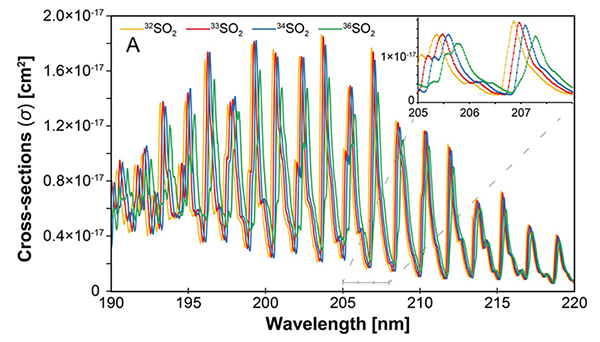 This article has been updated to include links and further information on October 27.