Biosensor for detecting proteins made entirely of a protein

Antibodies are proteins that work inside our bodies to protect us from diseases by binding and detecting foreign target molecules known as antigens.

However, an antibody isolated in a test tube cannot tell us about the existence of and/or binding to its target without the use of specific and expensive instrumentation to detect its existence.

Now, Hiroshi Ueda and colleagues at Tokyo Institute of Technology and The University of Tokyo have successfully constructed a fluorescent biosensor for serum albumin by carefully connecting the two color variants of a green fluorescent protein to the antigen binding fragment of an antibody.

The probe constructed by the researchers was made entirely of proteins, and successfully detected clinically relevant range of serum albumin by just mixing with a test sample and measuring its fluorescence.

Since it is antibody-based, the method which they call "Open Flower immunoassay" is expected to have many applications ranging from basic biological research tools to clinical diagnostics. 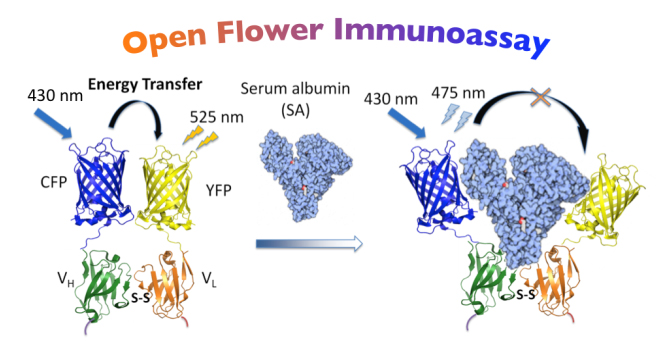