The search for alternatives

A team led by Takashi Koike and Munetaka Akita at Tokyo Institute of Technology has been investigating ways to improve existing methods for making carbon–carbon double bonds. Starting with carbon–carbon triple bonds, they searched for the right reaction conditions to form double bonds with the addition of useful chemical groups in specific positions. 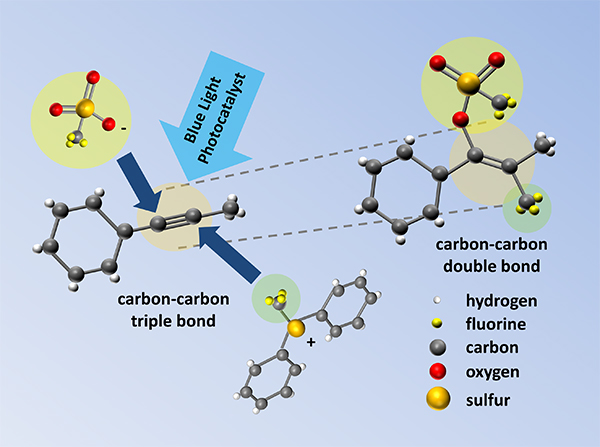 By applying a combination of a metal-based catalyst and blue light during a single chemical reaction, Akita and his group was able to make carbon–carbon double bonds that included a trifluoromethyl group—an important chemical feature of many recent drug target molecules. Most importantly, they were able to achieve control over the arrangement of the different groups around the double bond, and showed that the method could be used for a large range of different starting compounds.

A new route for new drugs

This novel, straightforward approach to making otherwise challenging target molecules will accelerate drug development studies and will also be a useful tool in organic chemistry, allowing new developments in fields such as agricultural chemistry and materials science. The team is now looking at further improving and extending these methods to make other important molecules containing carbon–carbon double bonds.