Investigations into isotopes of hydrogen and their bonds with oxygen at different pressures yields a unified explanation of changes in volume in ice.

The most common form of ice existing at ambient pressure on Earth is known as ice Ih. This is one of 17 different phases of ice, each with different molecular geometries that form depending on different pressures, temperatures, and synthesis paths.

Normally, the volume of a substance will contract when heavier isotopes replace lighter ones – the so-called 'normal' volume isotope effect (VIE). However, at ambient pressure, ice Ih—that can be obtained by cooling water down to zero degrees Celsius at ambient pressure—and XI (the hydrogen (H) ordered version of ice Ih) expands in volume when hydrogen atoms are substituted with deuterium. On the other hand, the normal VIE has been theoretically predicted in ice VIII and VII (H-disordered version of ice VIII) at ambient pressure and zero degrees Kelvin (K). Even in ice, a very simple substance, different types of VIE occur in different phases and reasons for this have not been clarified so far.

To clarify the VIE changes that occur in the above ice phases, Koichiro Umemoto at the Earth-Life Science Institute (ELSI) of Tokyo Institute of Technology and Renata M. Wentzcovitch at the University of Minnesota, together with co-workers across Japan, the USA and Italy, investigated the pressure dependence of VIEs in ice XI and VIII using first principles calculations.

The team predicted computationally that, in ice VIII at 300 K, the VIE is normal below ~14 GPa and turns to anomalous one at higher pressure. In fact, ice VIII exhibited three different VIEs dependent on pressure, including a second anomalous type with zero-point-motion volume contraction. The pressure dependence of phonon modes corresponding to the stretching of O-H bonds within the molecule was found to be the key to the nature of VIE. An X-ray diffraction experiment at the beam line BL10XU of SPring-8 showed the predicted pressure-induced transitions in VIE for ice VII, an H-disordered version of ice VIII, and supported the theory.

By comparing the results of ice VIII and VII, it was revealed that the qualitative nature of VIE in ice is independent on hydrogen ordering.

The results may be applicable to liquid water under pressure, as well as other H-bonded materials.

The different phases of water and ice

Frozen water, or H2O, is known to exist in 17 different phases, representing a whole family of types of ice with different molecular geometries. At ambient pressure on Earth, ice takes its hexagonal form (ice Ih), and contains a small percentage of deuterium atoms – a heavier isotope of hydrogen (H) that has a neutron as well as a proton in its nucleus.

Other ice phases occur according to the temperature and pressure under which they are formed. These include ordered and disordered H structures, with various different densities. In this study, Umemoto and his team focused on ice-XI (the H-ordered form of ice Ih), and H-ordered ice-VIII, alongside its H-disordered form, ice-VII.

Normally when a heavier isotope replaces a lighter one, the result is that the substance shrinks in volume. The presence of isotopes therefore impacts on the volume of a substance – the so-called volume isotope effect, or VIE. Ice Ih represents an anomaly in VIE because water expands when it freezes at 0°C at ambient pressure on Earth, in spite of the presence of deuterium.

Umemoto and his team wished to expand on current understanding of ice phases and changing VIE, hypothesizing that pressure would have an impact on the way the molecules interacted, and therefore the volume they would encompass.

In both ordered and disordered hydrogen structures in ice, oxygen (O) molecules form two strong bonds with two close H molecules, and two weak bonds with two more distant H molecules. Umemoto's team have shown that it is the stretching and resulting distances between these weak bonds that are key to VIE changes.

The team used first principles quasi-harmonic calculations. These are theoretical calculations which apply atomic behavior to predict what might occur under a certain set of circumstances. In this case, the calculations were used to determine the molecular interactions and structures of different ice phases under different pressures.

Their predictions were then backed up by x-ray diffraction measurements of ice-VIII. Umemoto and his team were able to pinpoint the pressure and temperature at which the ice-VIII VIE changed from normal (contraction) to anomalous (expansion).

This study sheds light on the behavior of ice molecules under high pressures, and how weak O-H bond-length impacts on VIE. The findings may have implications for other solid phases of H2O, liquid water under high pressure, and other H-bonded materials. 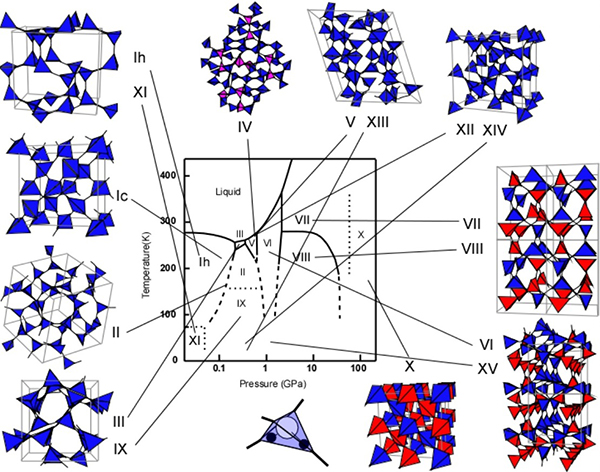 Figure. Phase diagram of the Ice. For the sake of simplicity, ice XVI discovered recently is omitted here.