Team Tokyo Tech extended its world record of consecutive gold medals to nine since the inception of the medal system at the International Genetically Engineered Machine (iGEM). Of the 257 teams, there are only three teams that hold this record — Tokyo Tech, the University of Edinburgh, and the University of Freiburg.

iGEM is the world's premier competition for undergraduate synthetic biology in which student teams are given a kit of standard genetic parts called BioBricks which students assemble to design and build a new biological system. The competition is divided into 15 tracks

, including 7 new tracks added this year. Results are shared in presentation form and evaluated by judges.

iGEM 2015 was held in Boston from September 24 to 28, with 257 teams from around the world participating. These included students from renowned universities such as MIT, Heidelberg University, and Tsinghua University. The Tokyo Tech team consisted of 12 students from the School of Bioscience and Biotechnology and 2 students from the School of Engineering, who are currently enrolled in the Creative Design for Bioscience and Biotechnology II course. 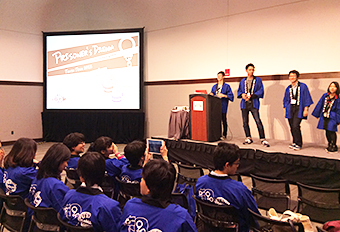 This year's Tokyo Tech team genetically engineered two E. coli to act as prisoner A and prisoner B of the iterated prisoner's dilemma, a well-known example in game theory. The students created a gene library to provide the E. coli with their own strategies such as cooperation, defection, and tit-for-tat, as decision making is central to game theory. By investigating dilemma in the use of genetic modification techniques, the team also examined societal participation in the development of new technologies, hoping to demonstrate the importance of synthetic biology to the general public.