Welcoming the delegation, President Mishima shared a brief introduction to Tokyo Tech and outlined the education reforms to be introduced next April. He also described the Institute's activities under the Top Global University Project funded by Japan's Ministry of Education, Culture, Sports, Science and Technology (MEXT).

Undersecretary Samedy expressed his gratitude to Mishima for hosting the delegation and explained that they were visiting under the auspices of JICA as follow-up to JICA's Project for Educational Capacity Development of the Institute of Technology of Cambodia*. Tokyo Tech's Professor Takada served as chief advisor for the project, which recently concluded. The delegation was in Japan to receive lectures and training on Laboratory-Based Education (LBE) for JICA's next project, which focuses on human resource development at the Institute of Technology of Cambodia (ITC).

Samedy emphasized that Cambodia's higher education system must be continuously strengthened to improve the quality of university graduates. He explained that his ministry hopes to develop human resources in the field of engineering by introducing LBE practices, applied widely in Japanese research universities, to higher education in Cambodia.

Following Samedy's remarks, Dr. Romny Om, the director of ITC, outlined the mission of his university, which was founded in 1964 in Phnom Penh. He described some of the challenges faced by ITC and mentioned the support the university has received from overseas university partners, mainly from France and French-speaking European countries, and from the Japanese government. He also mentioned ITC's participation in online education programs offered by overseas networks. 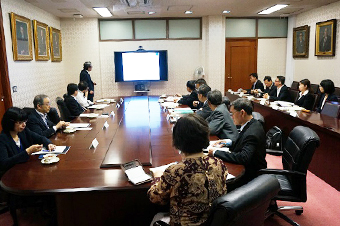 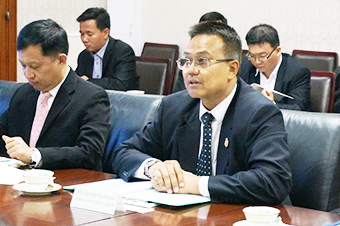 Discussions at the meeting

*
The Project for Educational Capacity Development of the Institute of Technology of Cambodia (ITC) is a technical cooperation project supported by JICA. It aims to introduce a research-based style of education in three departments of ITC — Electrical and Energy Engineering, Industrial and Mechanical Engineering, and Georesource and Geotechnical Engineering — by developing syllabi and tutorials for experiments and by improving teaching methods in order to produce talented personnel in the field of engineering.