Turning metals into insulators and back again

It is well-known that metals conduct electricity and that insulators prevent its flow, but imagine being able to change a material from a metal to an insulator and back again using only light. The ability to do this would be incredibly useful for making ultrafast optoelectronic devices for advanced computing applications. Some materials have shown the ability to switch from insulators to metals under light pulses. However, it is much more difficult to perform the reverse change from a metal to an insulator. 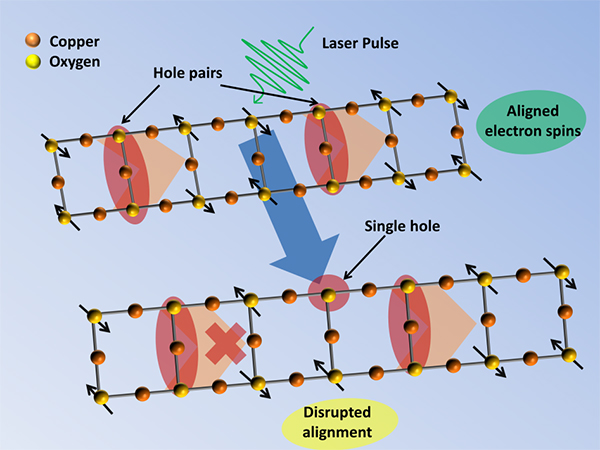 A laser pulse gives energy to electrons in the superconductor, making "holes" in the material that transform it into a metallic conductor. However, the research team found that shortly after the light pulse, the material actually became less conductive. This is because of how the superconductor conducts electricity. While pairs of holes can move along the copper oxide ladders very effectively, adding more holes disrupts the organization of electrons and prevents the hole pairs from moving along the ladders. By using multiple laser pulses it was possible to rapidly switch the superconductor between its conducting and insulating states.

This study demonstrated for the first time that ultrafast insulator–metal conversion at room temperature can be achieved with the use of light. Gaining this control over the electrical and magnetic properties of a material and being able to switch them so rapidly at room temperature represents an important step toward faster and more efficient optical and electronic devices. The study also develops a better understanding of the way that superconductors conduct electricity and may lead to more effective high-temperature superconducting materials.