Three students from the Graduate School of Information Science and Engineering took part in app development training held in Cebu, the Philippines, from August 30 to September 12. The training was part of the Education Program for Leading Information Technology Specialists, which aims to provide graduate students with the ability to turn theory into practice, and apply software development principles in new and creative ways.

The training in Cebu had the following main objectives while developing students' communication skills:

Practical training sessions involving presentations, debates, and role playing were held in cooperation with a language school in Cebu. Joining the Tokyo Tech students were participants from other countries including Korea, China, and Vietnam, making English the only shared language.

Brainstorming ideas for apps around the city

The second week of training, which focused on app development, took place at Cebu IT Park. Students formed three teams with engineers from local companies and students from universities in the Philippines to tackle the topic of "Android app development to support tourists in Cebu." Using the design thinking method, which sets out to create solutions by understanding and analyzing user needs, participants went out for street interviews at the IT Park. The intensive communication training in the first week paid off, and students were able to conduct informative interviews. 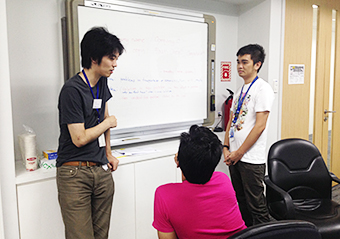 On the afternoon of the first day, participants had a brainstorming session for app development based on the street interviews. On the second day, they created paper prototypes, and went to the Cebu's biggest shopping mall for further interviews. Participants received plenty of feedback on the prototypes from shoppers and passersby. 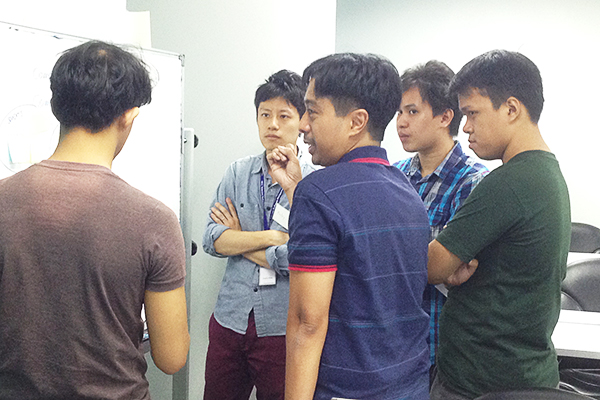 The third and fourth days were dedicated to trial app development. Participants divided tasks among the three teams and had earnest discussions before actual app creation began.

With managers from cooperative companies attending, presentations were held on the final day. These included explanations of basic concepts, idea assessment results using Lean Canvas — a tool for communicating a business model in one page — and actual app demonstration.

Presentation on the final day

In spite of the limited time available for development, all three teams gave impressive presentations. The apps, created after ample exploration of the city, were as follows:

After returning to Tokyo, students held a debriefing session on October 7. Participants described their Philippines trip as a valuable experience that particularly improved their communication skills.