More than 120 scientists and students from Japan and Sweden discussed the future of sustainable society at the 2nd Uppsala University-Tokyo Tech Joint Symposium on November 16 and 17.

Researchers from Uppsala University and Tokyo Tech shared their work on "Emerging Technologies and Systems for a Sustainable Society," including next generation solar cells, hydrogen fuel cells, energy efficient buildings, biofuels, and organic batteries. They also described their experiences collaborating with industry and starting new companies. 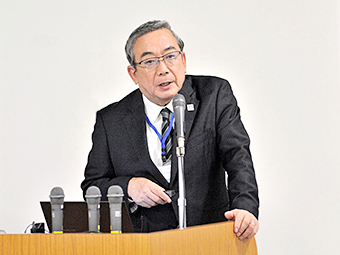 The symposium strengthened ties between Uppsala University and Tokyo Tech, which have been working together since last year on research and innovation. Such partnerships are key in Tokyo Tech's efforts to become more competitive and prominent in global academic research.

"This is a very useful and important occasion for us," said Makoto Ando, executive vice president for research at Tokyo Tech. "We need to enhance collaborative work with global universities."

At the opening session, Tokyo Tech President Yoshinao Mishima explained the education and research reforms the Institute is implementing to achieve its goal of becoming one of the world's top 10 research universities by 2030.

"It is a very ambitious target," said Mishima. "But we are trying our best to become the top university in science and technology by enhancing quality of education, strength of research, and globalization."

Uppsala University Pro-Dean of the Science and Technology Faculty Marika Edoff shared her work on solar cells and remarked on how the two universities both prioritize world-class research in environment and energy technologies to promote sustainable development.

There is "untapped potential" for collaboration between Japan and Sweden, said Victoria Forslund Bellass, minister counsellor at the Embassy of Sweden in Japan.

"Both countries are leading nations in science and research," said Forslund Bellass. "Uppsala University and Tokyo Tech are natural partners when it comes to world-class research and higher education."

Presentation by Ms. Victoria Forslund Bellass, minister counsellor at the Embassy of Sweden in Japan

During the first session, Professor Manabu Ihara of the Department of Chemical Engineering described the features of the Environmental Energy Innovation Building and their energy grid management system "Ene-Swallow."

He also shared his work on plasmonic solar cells, a field that has gained popularity in recent years. Ihara noted that when he first published on plasmonic solar cells in 1997, there were few other papers on the subject. But that began to change in 2008 as more scientists entered the field. "At the end of last year, there were 2,970 papers," said Ihara. "This field is drastically improving."

Professor Ken Okazaki from the Solutions Research Laboratory gave the keynote speech entitled "Toward the hydrogen society — innovations and globalization." He highlighted Japan's efforts at developing hydrogen fuel cars and his work to bring hydrogen from Australia to Japan to help meet future demand.

"If we have to use more and more hydrogen, then we have to make up some kind of strategy to supply that hydrogen," said Okazaki.

Breakout session on Entrepreneurship and Innovation

Marcus Lindahl, chair of industrial engineering and management at Uppsala, described their unique collaboration with the island of Gotland, which is building a dock for large cruise ships to bring in more tourists and revitalize its economy. A wide variety of university departments are collaborating with the island's industries both large and small to see how they can manage the huge influx of tourists.

The universities agreed to organize a third symposium in September 2016. They anticipate providing updates on research projects, expanding new research areas of collaboration, and adding education trends to the program. They also are interested in establishing a student exchange program in the near future.

In the closing session, Peter Lindblad, dean for collaboration at Uppsala's Science and Technology Faculty, elegantly described what makes Tokyo Tech and Uppsala University such excellent partners. They have much in common — both the scientific fields in which they excel and, more importantly, their visions.

"We both have ambition to be world-class scientists in engineering," said Lindblad. "But we like that our work as scientists should have an impact outside, for a better environment, better society, a better world."

Group photo of the symposium participants