Modern agriculture and global food security depend heavily on ammonia-based fertilizers, making the synthesis of ammonia one of the most important chemical processes worldwide. The Haber-Bosch process is one well-known way of making ammonia, but to work effectively it needs iron-based catalysts, harsh conditions, and enormous amounts of energy.

Some new ruthenium-based catalysts have shown great promise for performing ammonia synthesis under mild conditions, which could offer considerable energy savings. Combining ruthenium with a 'promoter' can accelerate the reaction further, but how the promoter behaves is poorly understood. To address this, researchers from Tokyo Tech have taken a ruthenium catalyst and a specific promoter. By fine-tuning the catalytic activity, they were able to develop a better understanding of how the catalyst and promoter work.

Professor Hideo Hosono and co-workers used aluminum and calcium-containing compounds as a promoter with ruthenium. This team has already shown that superior catalytic performance can be achieved by removing oxygen anions from the structure to allow for easier movement of electrons. In new work published in the Journal of the American Chemical Society, they used three different synthesis methods to control the oxygen content and concentration of electrons in the structure with great precision. By studying the catalytic performance, the team could also explain in detail how the catalyst works. 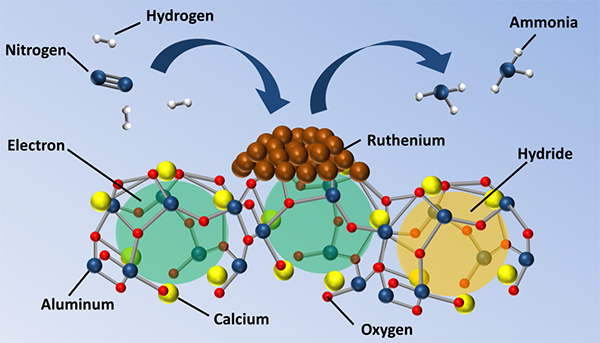 At low electron concentration, individual electrons are confined to "cages" in the promoter structure, and the catalyst gives a modest performance. When at least half the oxygen anions are replaced by electrons, the electrons can move between these cages and the compound changes from an insulating material to a metallic material. This change lowers the energy barrier for catalysis and helps nitrogen to split up. Moreover, the high electron density inside the cages prevents hydrogen from poisoning the catalyst.

The combination of these factors leads to a massive enhancement in catalytic activity. Considering the vast global scale of ammonia production, even small energy savings could have a major impact. This new understanding of the electronic properties of the promoter is an important step toward the adoption of next-generation catalysts in industrial-scale ammonia production, which will secure a stable supply of fertilizer for food production.

*
This article has been updated to correct a typographical error on August 5, 2016.