Earth's mantle, the large zone of slow-flowing rock that lies between the crust and the planet's core, powers every earthquake and volcanic eruption on the planet's surface. There has been a long-standing debate in the Geosciences on whether the lower and upper mantles are different in composition, and what such a difference would mean for mantle dynamics. A study published this week in Science Advances suggests that mixing due to mantle flow indeed occurs on a global scale, but discrete layers where material with similar composition has aggregated are nevertheless maintained.

Many huge slabs of ocean crust that have been dragged down, or subducted, into the mantle can still be detected in the deep Earth. These slabs slowly sink downward toward the bottom of the mantle. Some slabs sink all the way down, providing evidence for global stirring of the mantle by a process called "whole-mantle convection." A large number of these slabs have stalled out and appear to float 1,000 kilometers deep, indicating a notable change in physical properties with depth. Lead author of the study, Maxim Ballmer, senior scientist at ETH Zurich, former research scientist at the Earth-Life Science Institute (ELSI) -Tokyo Institute of Technology, and colleagues, exploited this natural phenomenon to gain insight into a region no human or machine can reach.

Ballmer and researchers from University of Maryland, Japan Agency for Marine-Earth Science and Technology, and University of Michigan used a computer model of a simplified Earth. Each run of the model began with a slightly different chemical composition—and thus a different range of densities—in the mantle at various depths. The researchers then used the model to investigate how slabs of ocean crust would behave as they travel down toward the lower mantle.

They discovered that the layering—with slightly denser material in the lower mantle than in the upper mantle—can explain the "floating" of some slabs at ~1000 km depth. The authors suggest the lower mantle may be a mix of rock types, but enriched in some intrinsically dense rock type. The most likely candidate, they say, is subducted mid-ocean ridge basalt that has accumulated in the lower mantle over hundreds of million years. Basalt is ultimately picked up by mantle plumes, hot rising columns of mantle rock that sustain surface hotspots of volcanism such as on the Big Island of Hawai'i—exemplifying the mantle's true nature as the ultimate recycler.

The finding that the mantle may be layered led to another conundrum: how can the layering survive for geologic timescales of billions of years, as slabs continuously sink through the mantle and cause global-scale mixing? To answer this question, Ballmer and co-authors set up another model of global convection, which simulates the evolution of the Earth over 4 1/2 billion years.

In the future, Ballmer and colleagues will assess the combined effects viscosity and density. If the rock types in the mantle not only differ in density, but also in viscosity (like water and crude oil, or water and honey), this should have strong effects on mixing as well as "unmixing" processes. For example, in the extreme case, high-viscosity rocks will never be mixed, like plums in the pudding.

"If the lower mantle has a different viscosity than the upper mantle, the related feedback on mantle convection and mixing may affect our understanding of Earth evolution," Ballmer says. Researchers are indeed just beginning to decipher the messages from the deep mantle, and its role in global recycling, which may have been key to maintain stable and life-friendly conditions on the Earth's surface over the past billions of years. 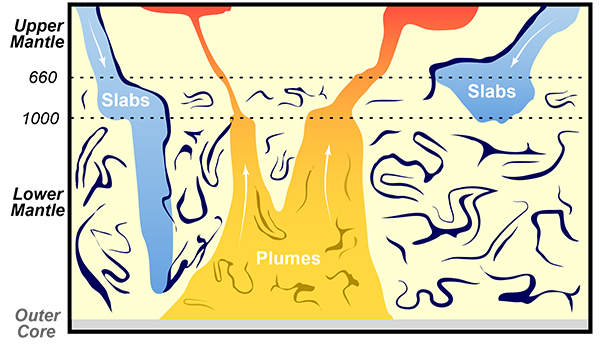 Figure.
Some slabs sink deep into the mantle, others stall at ~1000 km depth, i.e. somewhat deeper than the upper-lower mantle boundary at 660 km depth. This behavior can be explained by moderate mantle layering with an accumulation of basalt (blue squiggles) in the lower mantle. Basalt has originally been subducted into the mantle as oceanic crust, and is recycled by plumes that feed volcanoes beneath a hotspot.