Dr. Takeshi Nakamura at the Japan Agency for Marine-Earth Science and Technology (JAMSTEC: Asahiko Taira, President) and his team has analyzed data obtained by DONET (Dense Oceanfloor Network System for Earthquakes and Tsunamis)(1) during a moderate earthquake (Mw 5.8, depth 11 km) occurred in Awaji Island on April 12, 2013 (20:33 UTC). They demonstrated that long-period motions(2) are developed in extensive areas of deep ocean-bottom areas around the Nankai Trough. This work was carried out in collaboration with researchers from Okayama University, Tokyo Institute of Technology and University of Fukui.

Long-period waves generated in ocean bottom areas can propagate to lands where a human being lives. Also, these long-period components are likely to affect data analysis of earthquake source elements such as magnitude and mechanisms. Further understandings of the long-period ocean-bottom motions may lead to more accurate prediction of ground motions in land areas and also contribute to improving source analysis schemes by using ocean-bottom data.

In this study, land station data from K-NET and KiK-net operated by National Research Institute for Earth Science and Disaster Prevention (NIED) were used. The simulations were carried out using the supercomputer K at the RIKEN Advanced Institute for Computational Science (AICS), as part of Project 1, "Improvement of earthquake prediction accuracy" (Managing Director: Prof. Takashi Furumura, The University of Tokyo) in HPIC Strategic Program for Innovation Research Field 3, "Advanced Prediction Researches for Natural Disaster (JAMSTEC acting as strategic organization)." 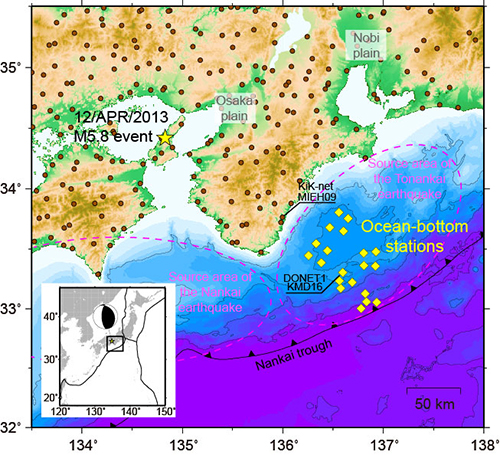 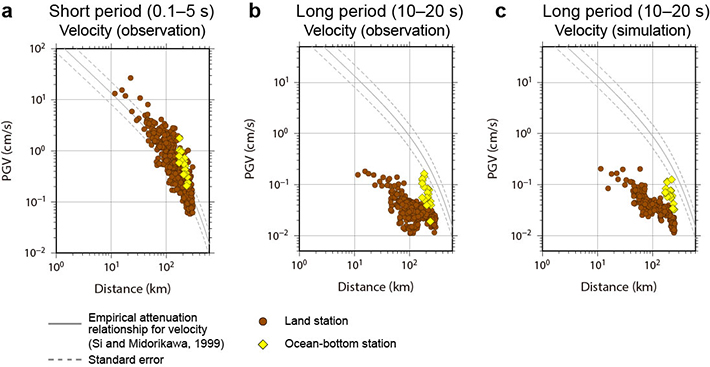 Figure 2. Estimated peak ground velocity (PGV) versus hypocentral distances
Yellow diamonds and brown circles indicate PGVs at ocean-bottom (DONET1) and land stations (K-NET, KiK-net), respectively. The figure (a) shows short-period PGV, in which no distinct differences bewteen ocean bottom and land stations are observed. However, long-period PGV indicates larger amplitude at ocean-bottom stations, which deviates from distribution at land stations (b). It means that ocean-bottom motions are larger than ground motions even when the hypocentral distance is the same. Similation results also demonstarted it (c).

Figure 4. Observed long-period velocity waveforms versus epicentral distances
Black traces represent observed velocity waveforms for the radial (left), transverse (middle), and vertical (right) components in the period band of 10–20 s at land and ocean-bottom stations, in order of epicentral distance. Blue bars in the vertical axis indicate ocean areas.
While the waveforms at land stations are simple motions with a rapid decay after the peak, those at ocean-bottom staions show prolonged motions. 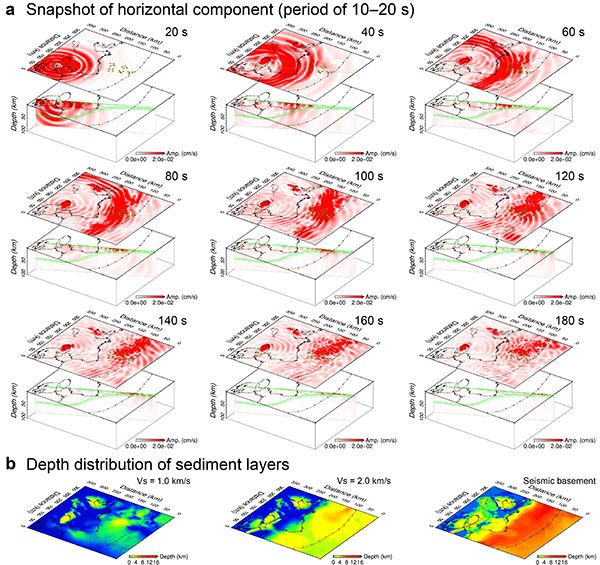 Figure 5. Snapshots of seismic wave propagation in the period band of 10–20 s (a) and sediment layers model (b)
Large amplitude (shown in red colour) and prolonged motions are found not only in the Osaka and the Nobi Plain but also in oceanic areas around the Nankai Trough. Land and oceanic areas where such distinct long-period motions are found correspond to distribition of thick sediment layers with low seismic veolocity.

The DONET (Dense Oceanfloor Network System for Earthquakes and Tsunamis) is a submarine cabled real-time seafloor observatory network for monitoring of earthquake and tsunami, which is deployed around the Nankai Trough by JAMSTEC. In 2010, the first phase of DONET, "DONET1" started its operation. A total of 20 stations were installed at water depths of 1,900-4,400m in the Kumano forearc basin off the Kii Peninsula. The stations equipped with strong-motion seismometers, broadband seismometers, quartz pressure gauges, differential pressure gauges, hydrophones and precision thermometers can observe broadband signals from crustal deformations and tsunamis to strong motions. Currently, the "DONET2" is under construction to establish 30 observatories at water depth of 1,100-4,400m off Cape Muroto. It is planned to complete toward full-scale operation by 2016.

It is a ground motion with a period band of a few seconds or longer accompanied by propagation of seismic waves. In this period band, surface waves that travel through the Earth's shallow layers are often observable at seismic stations. Large-scale structures such as high-rise buildings, bridges, and oil tanks sometimes sway heavily due to resonance with the motion.

As a core system of the High-Performance Computing Infrastructure (HPCI) initiative by Ministry of Education, Culture, Sports, Science and Technology, it was developed by Fujitsu and RIKEN, realizing a performance of 10 petaflops.