Research led by Tokyo Institute of Technology identifies a strategy for regulating genes involved in metabolic processes in cyanobacteria for enhanced ammonia production.

Nitrogen fixation in cyanobacteria metabolic processes may provide an important means for producing ammonia - a crucial ingredient in the chemical industry. Regulating the cellular processes involved to optimise microbial ammonia production has been a challenge. Now researchers at Tokyo Institute of Technology have successfully demonstrated a gene regulation strategy for enhancing ammonia production in the cyanobacterium Anabaena strain PCC 7120 (A. 7120).

The researchers first investigated the gene expression system in Anabaena using tetR promoter, which is regulated by tetracycline aTc - an antibiotic known to have a strong affinity to TetR. When a nitrogen-dependent tetR promoter was used, they observed a nitrogen-dependence in the amount of aTc needed to express the desired gene.

Finally, for the production of ammonia, the researchers repressed expression of glnA with an antisense small RNA. The gene glnA encodes an essential enzyme glutamine synthase for nitrogen assimilation in cyanobacteria. The antisense RNA—which represses it—was expressed under the control of the promoter previously used in this study, and tetR was expressed under the control of the nitrogen-dependent promoter. They successfully observed increased excretion of ammonia when the expression of antisense RNA was induced.

They conclude "These results demonstrated that the antisense repressors, used as the regulators of endogenous gene expression, may become useful tools for the production of desired substances in A. 7120."

Ammonia is colourless gas with a potent odour. It is a compound of nitrogen and hydrogen with the chemical formula NH3.

As the precursor of both food and fertilizers and the basis for a range of pharmaceuticals, ammonia is increasingly important in the chemical industry. Global production in 2012 was anticipated to reach 198,000,000 tonnes, an increase of 35% on the amount produced just 6 years previously. It has been produced through the Haber process for over 100 years but ways of increasing production are in high demand.

Nitrogen is present in the air at a concentration of around 78% as a triply bonded diatom molecule. Living organisms need nitrogen for biosynthesis of several essential molecules, including nucleotides for DNA and RNA, and amino acids for proteins.

Nitrogen fixation breaks the triple bond to form either ammonia or nitrogen dioxide. The nitrogen bonds in these molecules are weaker freeing up the nitrogen for reactions to produce other molecules.

Cyanobacteria perform oxygen-evolving photosynthesis. They are found in all parts of the planet where there is light and are thought to be responsible for the production of today's oxidizing atmosphere from the reducing atmosphere present in the early days of the Earth.

Some cyanobacteria are also capable of nitrogen fixation in aerobic conditions. In scarce fixed nitrogen conditions they form heterocysts where the process takes place. 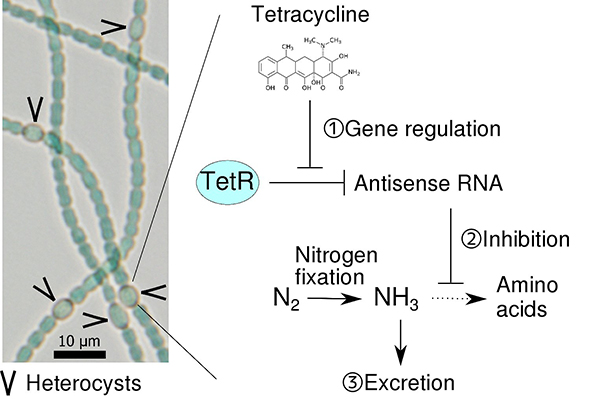