Researchers use microdroplets to study non-equilibrium reactions like those in living organisms.

"Living systems are achieved by complex chemical reaction dynamics far from equilibrium, such as gene expression networks, signalling networks, metabolic circuits and neural networks," explain Masahiro Takinoue at Tokyo Institute of Technology and his colleagues. The researchers now demonstrate that their microdroplet system can offer the control over chemical fluxes needed to keep this kind of reaction far from equilibrium.

Takinoue and his colleagues used a microfluidic system containing a droplet of water in oil with electrodes either side as the chemical reaction site. They then passed a train of water-in-oil droplets past the reactor droplet. As each droplet passed the reactor droplet, applying an a.c. voltage across the electrodes led to fusion, allowing chemical exchange. The shear force of the droplet train then caused fission, leaving the reactor droplet self-contained until voltage-induced fusion with the following droplet.

The research team mathematically modelled how by switching the a.c. voltage on and off they could control the fusion/fission timing, and hence the chemical flux and reaction dynamics. As a model system, they then produced a microdroplet system of bromite (BrO3-), sulphite (SO32-) and ferrocyanide (Fe(CN)64-). The pH in the droplet oscillates as hydrogen cations are produced and consumed through autocatalytic reactions. Using pH-sensitive fluorescent molecules, the researchers could monitor these reaction dynamics and incorporate feedback.

"Complicated microfluidic components, such as valves and mixers, are unnecessary," point out the researchers, as the a.c. voltage pulse-modulated reactor provides chemical flux control. In addition the fast fusion response to the applied electric field allows a range of waveforms of the droplet train density to be studied, including sinusoidal, square and saw tooth. As a result it could provide a powerful tool for studying synthetic biology to understand life, as well as bio-inspired self-controlling and dynamic systems.

A system is at equilibrium when it is in its lowest free-energy state and its entropy is maximised. Many of the reactions central to the processes for life are far from equilibrium, since the lowest energy state of the atoms and molecules in the chemicals, cellular structures and tissues that comprise living organisms is decomposition, as seen in corpses.

Without control over the chemical flux the entropy of these reactions will increase bringing the system closer to equilibrium. In cells this control is achieved with semipermeable membranes and highly responsive systems. In artificial systems valves and mixers can be used but these can be bulky and complicated. The fusion and fission of microdroplets achieves chemical flux control in a simple system that is readily scaled and extended for multiple reactors.

The control of small volumes of liquids—microfluidics—is a multidisciplinary field with applications in inkjet printheads, DNA chips, lab-on-a-chip technology, micro-propulsion, and micro-thermal technologies. By using discrete droplets instead of continuous fluid flow, it is possible to digitise these systems, allowing cell-based approaches and hierarchical technologies.

The droplet open-reactor system may provide a complex reaction system for research in synthetic biology such as artificial DNA circuits, and gene circuits, metabolic systems and microchemostat-like reactors. The researchers also suggest that the precise control over non-equilibrium chemical reactions that the system achieves will be useful for studying enzymatic networks and the production of hierarchical materials formed through biomineralization processes, such as bone.

They also highlight that the a.c. voltage pulse-density modulation used to control the microdroplet reactor system is compatible with control theory for dynamical systems in general. In addition it may have applications in computational intelligence, which is a set of methods inspired by nature that are designed to tackle real-world problems intractable to traditional mathematical approaches. It is also an ideal platform for developing software-wetware technologies. 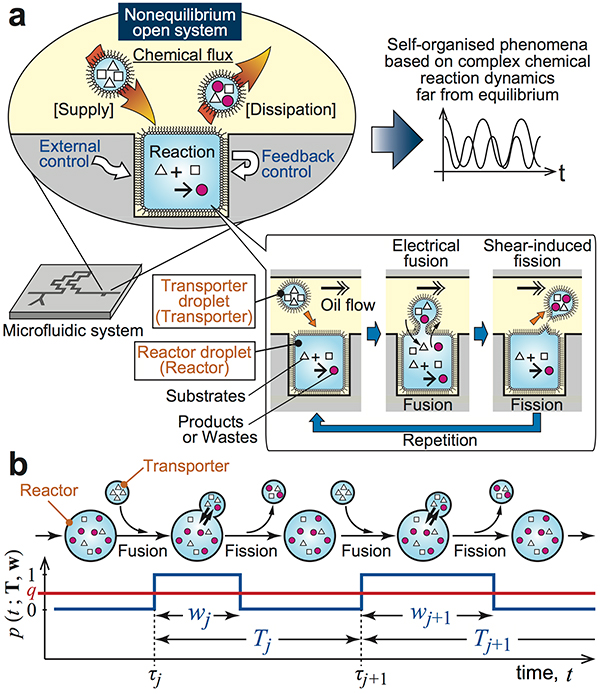