Masaki Matsui, a 4th-year undergraduate of the Department of Mechano-Aerospace Engineering, was seventh fastest in his section of the 92nd Hakone Ekiden, the traditional Tokyo-Hakone round-trip college relay race held on January 2 and 3, 2016. Matsui, who ran the 21.4-km 8th section from Hiratsuka to Totsuka in 1:06:12, participated as a member of the Kanto Region University Student United Team, a group of top runners from universities that did not qualify.

Handover of the sash 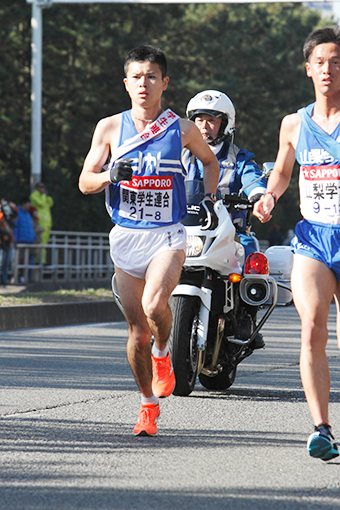 A symbolic and crucial part of the Hakone Ekiden is the handover of the team's sash from one runner to the next. If a runner fails to reach the hand-off point within 20 minutes of the top runner in that section (10 minutes in the 2nd and 3rd sections), the next runner of the team starts his section with a substitute sash. Although times are still recorded, failure to pass on the sash symbolizes a breakdown in team effort and is a daunting reminder of the pace of the leaders.

As members of the Kanto Region University Student United Team are not all part of the same institution, their times are not officially recorded. Unofficially, the team finished the first day of running in 15th place in a total time of 5:39:01. On the second day, Matsui successfully received the team's sash from the 7th section runner, Surugadai University's Yoshihiro Hiraga, and then quickly overtook two other runners. He continued at an impressive pace and outran three others before handing over the sash to the next runner, Takuma Shibata from Heisei International University. The team finished 11th at the end of Day Two in a time of 11:15:30, just 9 seconds slower than the 10th team.

This was Matsui's second Hakone Ekiden after he ran the 9th section from Totsuka to Tsurumi in 2015. His efforts again greatly contributed to the team's results. 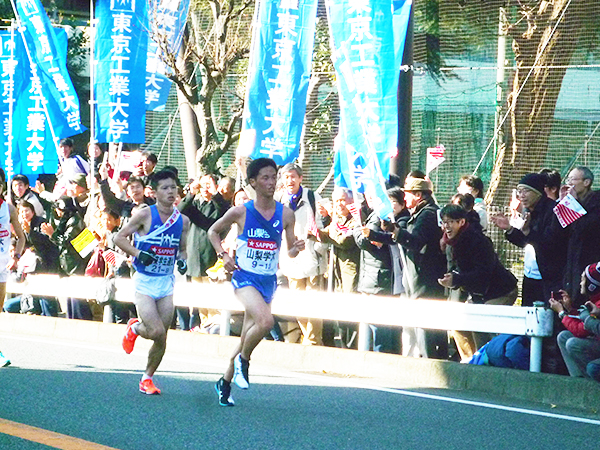 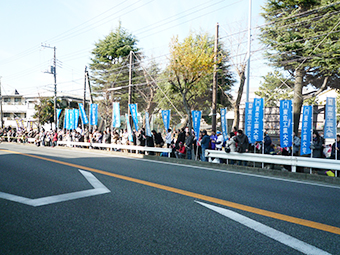 Tokyo Tech's blue banners were very visible along the 8th section where supporters included President Yoshinao Mishima and Executive Vice President Toshio Maruyama. The spectators gave a rousing cheer as Matsui ran past them with his Tokyo Tech Track & Field Club uniform on.

Matsui, who excels at both academics and sports, has attracted significant attention in the Japanese media, earning nicknames such as the "Tokyo Tech typhoon." 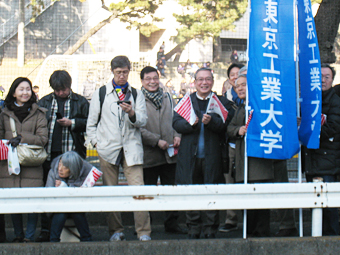 President Mishima and EVP Maruyama
among the Institute's supporters 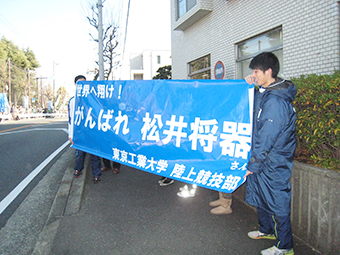 As a member of the Kanto Region University Student United Team, I ran a 1:06:12 in the 8th section of the 2016 Hakone Ekiden. My time was this year's seventh best in the section. Last year I was neither able to receive nor hand off our team's sash because of the cut-off time, but this year we succeeded in both.

Many people supported me to run the Hakone Ekiden, which made this fulfilling experience possible. I will treasure it for the rest of my life. Thank you very much.