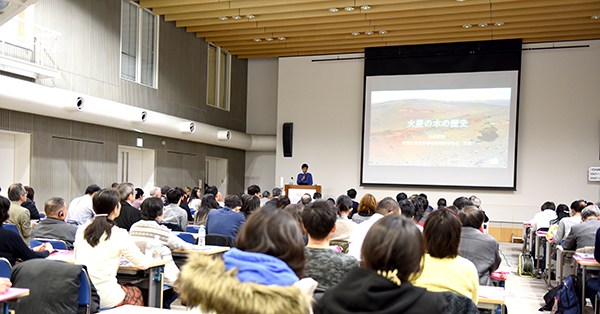 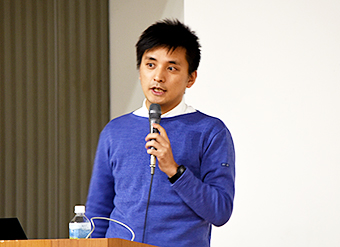 Dr. Tomohiro Usui from Tokyo Tech brought together the last few decades of data collected on Mars to discuss "The History of Water on Mars."

He challenged the audience to select Mars from a group of unfamiliar planetary images. It was a fun trick as all the images were of Mars as imagined from different time periods in its evolution. The National Aeronautics and Space Administration (NASA) rover has provided images and chemistry measurements with evidence of a vigorous water cycle on early Mars.

While there are only a few locations on our dynamic Earth with surface rocks over 1 billion years old, the entire Martian surface is dominated by processes before or around 3 billion years ago. Measurements of the Martian atmosphere are an exact match to atmospheric gases trapped in meteorites found on Earth, identifying them as Martian meteorites. 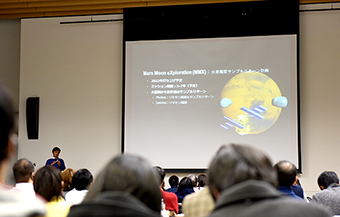 Dr. Usui is a petrologist studying the minerals in these Martian meteorites to uncover the history of Mars billions of years ago. The results reveal that Mars repeatedly formed oceans that eventually disappeared into space or became locked as ice in the subsurface. While water is no longer standing in oceans or lakes at the surface, recent images show that briny water seasonally flows down the sides of cliffs in the Garni Crater. Examining the Martian rocks can reveal its ancient deep water cycle as humankind tries to gain insight as to why there are no signs of life from this potentially habitable time in the planet's history. 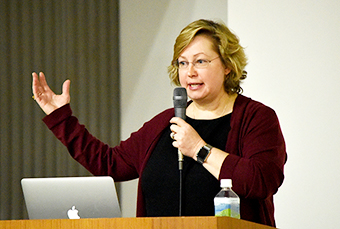 Dr. Victoria Meadows from the University of Washington/NASA Astrobiology Institute

Dr. Victoria Meadows from the University of Washington/NASA Astrobiology Institute took the audience on a visually stunning tour of planetary possibilities guided by exoplanet observations in her talk "NASA's Search for Life Beyond the Solar System."

Around 20 years ago, scientists began to measure the effects planets can have on their host stars, including small movements of the star due to the planet's gravity and dimming of the star as the planet passes directly between us and the host star. The NASA Kepler space telescope was launched to focus on one small patch of sky and found thousands of stars in just a few years. Surprisingly, most planets appear to be very different from our Earth, and the planetary systems are very different from our solar system. These observations challenge conventional notions of habitability, which is a general term for how likely a planet may be able to develop life based on temperature, liquid water, atmospheric chemistry, and a growing number of factors as scientists begin to understand the complexities of our own planet. 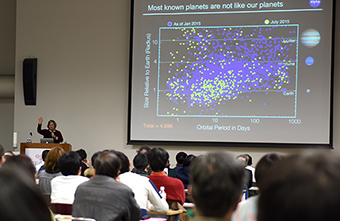 In the future, NASA's Transiting Exoplanet Survey Satellite will look at much closer stars to collect characteristics such as mass, size, and density of planets while the infrared James Webb Space Telescope will attempt to determine atmospheric chemistry. Since these and missions in the distant future can only examine a tiny fraction of stars in the sky, Dr. Meadows works to understand how to identify which planets may be the most habitable. One eye-catching new method she developed is to observe the sunlight glint off the water from a planetary ocean, a technique which she has verified on the methane oceans of Saturn's moon, Titan. It is truly an exciting time to consider the effects life has on a planet and how astronomers might begin to observe the signals from tiny points of light.